Redeploy The Oyo CP, She Is Too Slow And Biased - Gani Adams Tells IGP


The OPC leader also called on the inspector-general of police to redeploy her and bring a stern CP to the state. 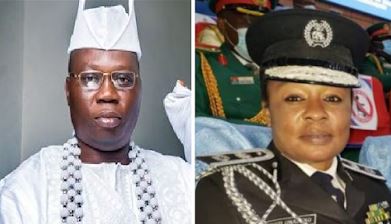 Gani Adams, the Aare Ona Kakanfo of Yorubaland, has urged the Inspector-General of Police, Mohammed Adamu to redeploy the Commissioner of Police in Oyo, Ngozi Onadeko, for being slow and biased.

According to the Oodua Peoples Congress, OPC leader, the CP is too gentle to handle the security situation in the state.

The Oodua Peoples Congress, OPC leader also called on the inspector-general of police to redeploy her and bring a stern CP to the state.

Adams in a statement signed and released by his media aide, Kehinde Aderemi, the police boss is also playing politics with sensitive security issues.

He alleged that most of the killer herders and kidnappers apprehended in the Ibarapa area of the state have been released by Onadeko,  that they have gone back to resume their criminal activities in the area.

“Last week, Oba Lamidi Adeyemi, the Alaafin of Oyo, expressed concern at the spate of insecurity in the state.

“Therefore, I am appealing to IGP Adamu and the police service commission to redeploy the Oyo CP, who according to my finding is too slow and biased, especially, on sensitive security issues.

“The Oyo state police boss had released many of the kidnappers apprehended by the OPC and other local security operatives and they have returned to their base to perpetrate more crimes.”

He also called on Seyi Makinde, Oyo governor, to cooperate with the IGP to secure the state, stating that intelligence reports at his disposal indicate that kidnappers are already taking positions at Ibarapa.