Details have emerged showing how the minister of Agriculture and Rural Development married his new 18-year-old wife. 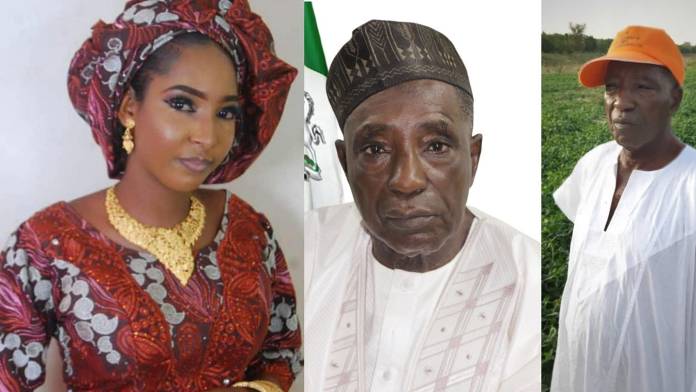 Sabo Nanono and wife, Rakiya
The marriage between 74-year-old minister of Agriculture and Rural Development, Sabo Nanono and his teenage wife, Rakiya, 18 has been confirmed.
The minister on Saturday got married to the teenager at Dorawar Mallam Tanko hamlet located in a bushy suburb of Jere Local Government Area of Kaduna State.
The secret wedding was only attended by Mr Nanono’s three representatives.
Sources in the hamlet told DAILY NIGERIAN that the minister met the milkmaid near his farm in Bwari, where she usually hawked millet balls and milk, known as ‘fura da nono’.
“It was love at first sight as the girl accepted the minister’s proposal without delay. The minister beat about five young suitors to win her heart,” said a family source.
The source told our reporter that she was first married to a Fulani man named Ado Baba, who got ‘missing’ some four years ago.
“Ado Baba was arrested four years ago during a raid at a criminals’ hideout in Jere, and since that arrest nobody heard about him again.
“We searched all the police stations in Kaduna and Niger and they said he was not with them. We believe he was killed,” said the source.
DAILY NIGERIAN gathered that the minister has rehabilitated the bride’s family house and installed a solar powered borehole and street lights around the hamlet.
Top Stories