A prime minister has been fined thousands of dollars for disobeying coronavirus rules. 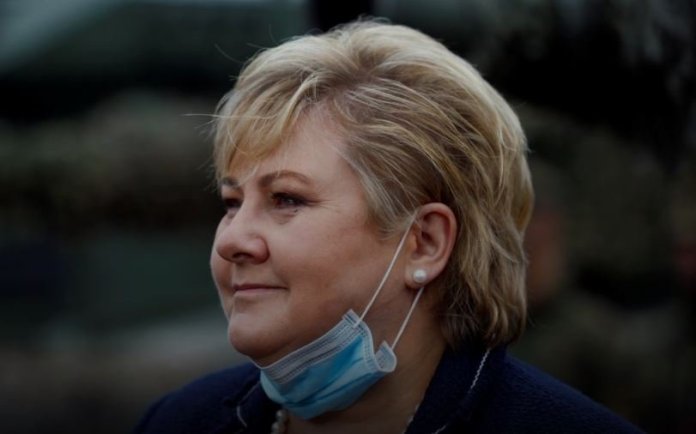 Norwegian PM, Solberg
The police in Norway has fined its Prime Minister 20,000 Norwegian crowns ($2,352).
The fine was imposed on the Prime Minister, Erna Solberg for breaking COVID-19 social distancing rules.
Solberg was fined when she organised a family gathering to celebrate her birthday.
The fine is for 20,000 Norwegian crowns ($2,352), the Police Chief, Ole Saeverud, told a news conference.
The two-term prime minister apologised last month for organising an event for her 60th birthday with 13 family members at a mountain resort in late February, despite a government ban on gatherings of more than 10 people.
While the Police would not have issued a fine in most such cases, the prime minister has been at the forefront of the government’s work to impose restrictions, the Police said.
“Though the law is the same for all, all are not equal in front of the law,’’ said Saeverud, justifying the fine.
“It is, therefore, correct to issue a fine in order to uphold the general public’s trust in the rules on social restrictions,’’ he said.
The Police said Solberg and her husband, Sindre Finnes, made the decision together to hold a celebration and picked the restaurant, with Finnes taking care of the practical arrangements.
Though the Police said he had broken the law as well, he was not fined.
The restaurant, where the celebration took place, was also found to have violated the law but it was not fined.
“Solberg is the country’s leader and she has been at the forefront of the restrictions imposed to limit the spread of the virus,’’ said Saeverud.
The prime minister’s office was not immediately available for comment.
Solberg, who faces elections for parliament in September, has championed strict rules to curb the spread of the coronavirus, resulting in some of Europe’s lowest rates of infection and deaths.
But the country saw a rapid rise in infections in the first quarter of 2021, led by more contagious variants of the virus.
This forced the government to tighten restrictions in late March.
Top Stories