He said this on Thursday in Abuja while speaking at the book launch of Aisha’s biography titled, “Aisha Buhari: Being Different”. 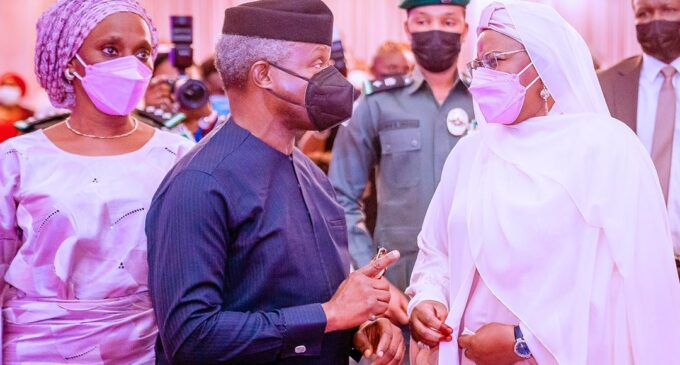 Nigeria's number two man, Vice-President Yemi Osinbajo has said that Aisha, wife of President Muhammadu Buhari, connects with Nigerians like no other first lady in the history of the country.

He said this on Thursday in Abuja while speaking at the book launch of Aisha’s biography titled, “Aisha Buhari: Being Different”.

The vice-president said Aisha became the first holder of the office of first lady to join social media for an undiluted access to views of the larger population.

He also noted that the first lady never shies away from the truth, even when it’s controversial.

“It’s unlikely that any first lady in Nigeria’s history has, in such a few short years, captured the imagination of Nigerians as profoundly as Aisha Buhari,” Osinbajo said.

“She is, of course, the first first lady to be on Twitter, on Instagram, and other social media platforms, getting her unfiltered views across to the Nigerian people and she’s probably the first to receive, in real time, the opinions of Nigerians on her views.

“With her views, forthright, crisp, truthful, and once in a while controversial, she has established an ongoing conversation with the Nigerian people — the issues that concern them most, the issues that concern us the most, good governance, security, putting food on the table, the education of our children, prompt payment of pensions to army veterans, drug abuse, the violation and victimisation of women.”

He also noted that “every once in a while she airs her own personal struggles — her annoyance — in a manner probably unprecedented in the role of the first lady anywhere”.