The suspect was arrested after he created fake profiles on social networking websites, befriended and duped people. 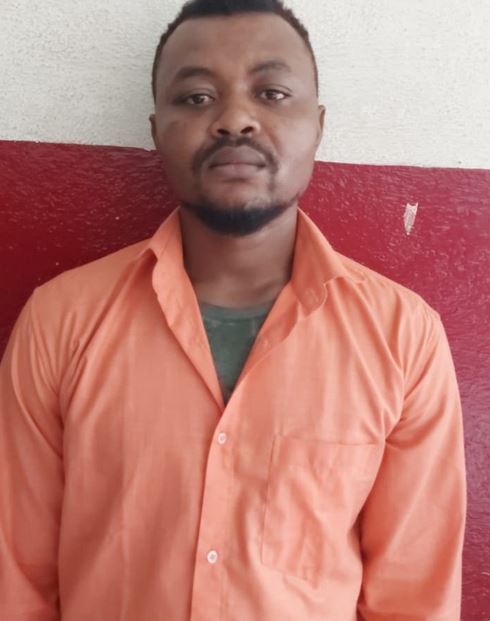 The cybercrime wing of Rachakonda police in Hyderabad has arrested a Nigerian who allegedly defraud people on the pretext of sending gift parcels after befriending them on social media platforms.

The accused identified as Albert Emeka Christopher, 38, who was living in Uttam Nagar, West Delhi, was arrested on Monday, April 12.

The police seized five mobile phones, 13 cheque books, nine ATM cards and a passport from him.

According to the police, Albert, came to India in 2020 on a business visa. He started a cloth business at Uttam Nagar. He married to Roopa Hanchinmani from Karnataka. Later, he also came to know that some of his Nigerian friends were committing cyber frauds and earning huge money.

The accused also decided to commit similar offences. He created fake profiles on social networking websites and befriended people. The accused would inform his friends that he is working in a reputed company in foreign countries and would sent them costly gifts.

However, after a few days he would trap victims by saying that he is from the Customs department and the gifts need clearance. With this modus operandi, he cheated gullible people, demanding them to deposit money in various bank accounts citing courier, customs, and foreign exchange charge

In August 2020, the suspect called a victim identified as Shiva Kumar over WhatsApp and became friends. A week later, he said he was sending a gift parcel containing an iPhone and other expensive gifts.

“A few days later, some persons pretending to be customs and immigration officials of Delhi airport called Shiva Kumar over phone and asked him to send money towards various taxes and fees for claiming the parcel,” said S Harinath, ACP (Cybercrime) Rachakonda.

The victim transferred Rs. 1.62 lakh to the accounts provided by Albert to him and later on realizing he was duped, approached the police.

In another case, Albert allegedly cheated a woman in a similar manner of Rs. 3.29 lakh. The suspect conned the woman saying that he works for a multinational company and asked her to pray for his promotion.

A few days later, Albert told her that her prayers were answered and he got a promotion. As a gesture, he is sending a gift parcel for her. As usual, the victim received phone calls from some persons claiming to be immigration and customs officials.

“The woman transferred Rs. 3.29 lakh in the bank accounts provided by the fake officials,” said the ACP.

Based on the complaint filed by the victimes, the department began investigation. Albert was arrested in West Delhi and brought to Hyderabad on transit warrant. He was produced before court and remanded in judicail custody. 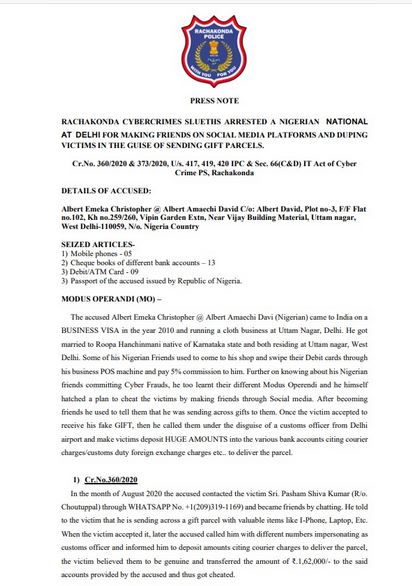 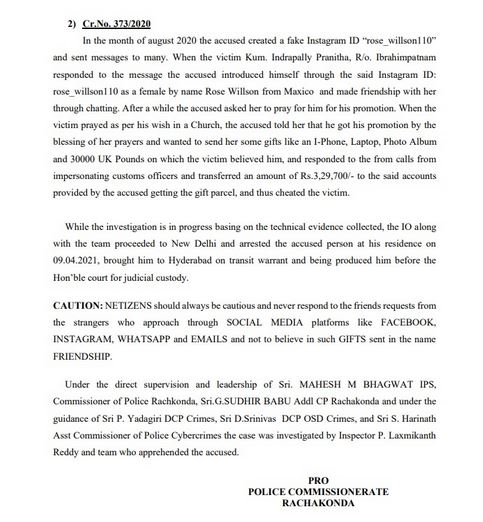