Operatives of the Eastern Security Network have reportedly killed a Fulani herdsman in Ebonyi state. 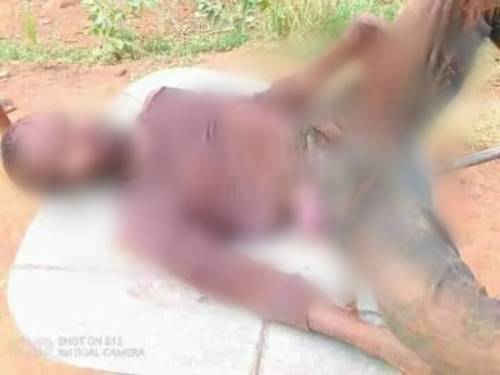 Herdsman reportedly killed in Ebonyi state
A Fulani herdsman has been reportedly killed in Ebonyi state by men of the Eastern Security Network.
According to Sahara Reporters, ESN also reportedly shared a photograph of the suspected Fulani terrorist they killed during the violence which has engulfed Umuogudu Akpu-Ngbo Community in the Ohaukwu Local Government Area of Ebonyi State since Monday.
Sources in the community told SaharaReporters that the suspected Fulani terrorist was one of the several militants who invaded the community to allegedly carry out a reprisal but were gunned down by the ESN operatives.
A top source revealed that the Fulani herdsmen were among those fuelling the crisis in the Ebonyi communities.
“This is one of the Fulani terrorists that came to attack the Ngbo community in Ebonyi province on Monday. Despite the charm tied around his waist, the gallant ESN operatives still sent him to face proper judgment.
“God bless ESN operatives forever. The ESN is our last hope, since Governor Dave Umahi’s best effort after several months of bloodshed is to come up with a toothless outfit called Ebube Agu,” the source stated.
Suspected Fulani herdsmen had in March killed at least 25 persons in Egedegede community in the Ishielu Local Government Area of the state.
The governor later said despite protecting Fulani herdsmen in the state and South-East region, they still killed people of Ebonyi.
Umahi, during a visit to the community, confirmed that AK-47-wielding herdsmen killed at least “15 persons” from the information he got.
He said, “We are in Ishielu where the AK-47 herdsmen came yesterday (Monday) and killed 15 of the members of this community. I remember a year ago that we had an incident of the killing of two herdsmen within this same location. And immediately, the security agencies and local government chairman and community leaders all came together to condemn the attack and killing and we immediately asked the security agencies to fish out the people who did.
“We fished them out and as we talk, they are standing trial in Ebonyi State. The community, government and security agencies appeased the herdsmen and made peace with them. And so, it is very shocking that overnight, all the herdsmen in Ishielu LGA vacated which means that the local herdsmen are part of the conspiracy of the killing of our people."
Top Stories