It was gathered that the suspects, while conveying the stolen items to a destination in the state, were accosted by policemen around 3am on Sunday. 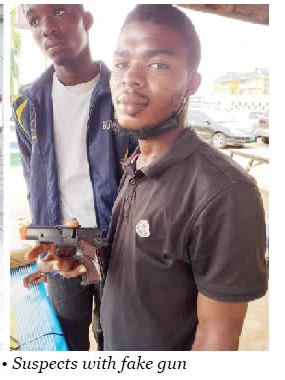 Two men identified as Awosika Kehinde, 24, and Olatilewa Ayomide, 18, have been arrested.

They were nabbed by police operatives attached to the Sagamu Road Division in Ikorodu, on Monday, April 12, 2021, around 12.45pm, with a dummy pistol in the Sabo area of Ikorodu.

Adejobi said “The suspects were accosted by policemen on a motorcycle in the Sabo area of Ikorodu. After preliminary investigation, it was revealed that the suspects were using the dummy gun to scare their victims anytime they were on robbery operations, particularly in traffic. They are giving useful information to assist the police in the course of their investigation.

“Items recovered from them include one dummy Beretta pistol and some assorted charms. The Commissioner of Police has also directed that the suspects be transferred to the command’s Special Squad for thorough investigation.”