According to the man, his friend did not see any reason to marry his girlfriend of 4 years. 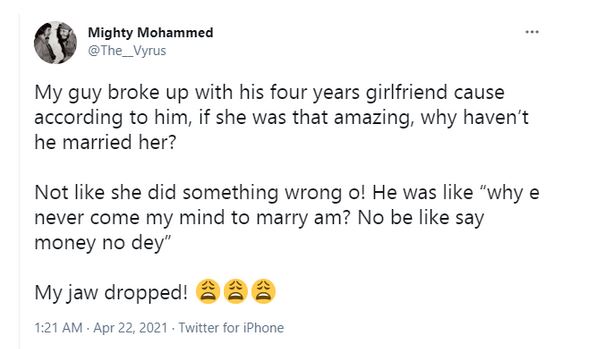 A Twitter user took to the platform to narrate how his friend ended his 4 years relationship because he couldn’t find any reason for not marrying her.

@The_Vyrus who noted that his friend admitted that his girlfriend didn't do anything, said he (friend) kept saying "if she was amazing, why hasn't he married her".

"My guy broke up with his four years girlfriend cause according to him, if she was that amazing, why haven’t he married her? Not like she did something wrong o! He was like “why e never come my mind to marry am? No be like say money no dey” My jaw dropped!"