A Nigerian man has shared a screenshot of the amount Don Jazzy gave him for just photoshopping Rihanna in his picture. 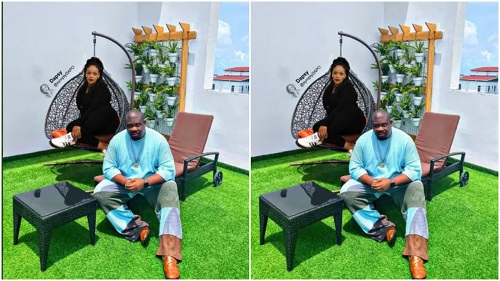 Don Jazzy and Rihanna
A Twitter user has revealed that he got a whopping N200,000 alert from record producer Don Jazzy for just photoshopping Rihanna in his picture.
According to the chat which surfaced on social media, the Mavin record boss had stumbled on a job of the photo editor; pleased with his edits, he asked the Twitter user to do a job for him.
The Twitter user offered to work for Don Jazzy for free, and he photoshopped Rihanna to a picture of Don Jazzy. He was later offered the sum of two hundred thousand Naira for the job by Don Jazzy.
However, the photo generated hilarious reactions on Twitter as netizens mocked the Mavin record boss that even in the photoshop picture, he is still unable to get close to Rihanna. 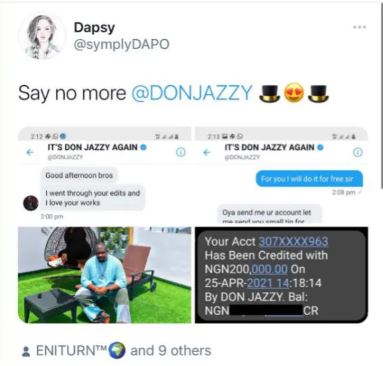 See reactions below:
@A6oki wrote: Even for the Photoshop, Rihanna still dey maintain social distancing from don jazzy
@kiss_debbyy wrote: So Don Jazzy wired that guy 200k to photoshop Rihanna that never came closer
@zion_trybe wrote: Don jazzy pay people ridiculous sums esp on this app for doing next to nothing…. ooh God, I tap into his anointing, just bless me that way!!!
@chef_yinda wrote: Don Jazzy is one of the best people we have around,there is no day I don’t see a post on his Instagram supporting one small business owner or skit maker and the likes…God replenish and keep him
Why you should learn to keep your personal life coded like Don Jazzy – OAP N6
@Mc_Phils wrote: Even in photoshoped Don Jazzy still didn’t get to touch Rihanna
Top Stories