Flavour N'abania has left a white woman blushing to the extent of inking his face on her body. 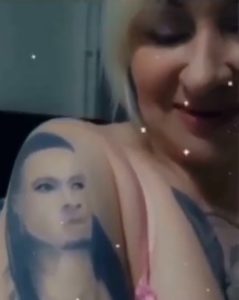 Russian woman inks Flavour N'abania's face on her body
A Russian woman so much in love with Nigerian musician, Flavour N’abania has gone to the extent of tattooing his face on her body.
According to the Moscow-based white lady who showed off her tattoos in a video making rounds on social media, she got the first tattoo of the singer’s face on her shoulder in 2015.
Marina added that she inked another tattoo of Flavour on her left arm just to show how dear his songs are to her as she names him her best singer.
Watch the video below: