The vehicles were captured on Sunday when the group attacked a Nigerian Army location at 156 Battalion in Mainok area, Borno state.

Nigerian army tanks and vehicles captured by terrorists
A faction of Boko Haram, the Islamic State West Africa Province (ISWAP) has flaunted newly acquired armoured tanks and operational hilux vehicles belonging to the Nigerian army after capturing it from soldiers.
According to SaharaReporters, the vehicles were captured on Sunday when the group attacked a Nigerian Army location at 156 Battalion in Mainok area, Borno state.
SaharaReporters had reported how the gunmen attacked the military camp.
The terrorists who came in no fewer than 15 gun trucks also burnt down the military base.
The insurgents on the statement displayed photographs of two brand new Isotrex Legion MRAP captured from the convoy delivering them to the Nigerian Army Base at ‪Mai‬nok.
Also displayed were T-55 tank, Ukrainian BTR-4EN, motorcycles and different hilux operational vehicles.
Boko Haram and its offshoot, Islamic State West Africa Province, have killed thousands and displaced millions in Northeastern Nigeria.
In the past months, soldiers have been targeted by the insurgents, who waylay them.
Hundreds of soldiers and officers have been reportedly killed since January 2021.
At least 33 soldiers were recently killed when two explosive-laden vehicles rammed into a military convoy in Wulgo.
The suicide bombers were identified as Abu Bakr al-Siddiq and Bana Jundullah. The group also claimed four military vehicles were destroyed.
In February, about 20 soldiers were also killed in Malari, Borno State by the insurgents.
SaharaReporters gathered that the soldiers were on patrol to clear some Boko Haram elements in the area following credible intelligence when they were ambushed by the group. 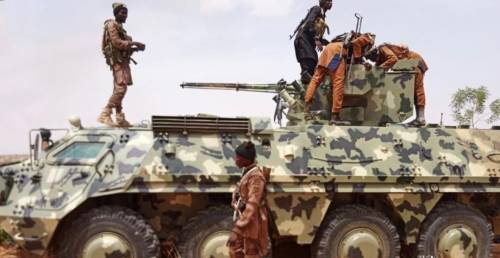