President Muhammadu Buhari might be in trouble as Reno Omokri is currently planning a protest against him in France. 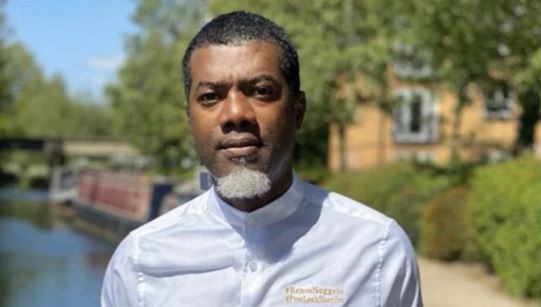 Reno Omokri
A former presidential aide, Reno Omokri has made a threat towards President Muhammadu Buhari.
According to him, he is planning to start a protest in Paris, France, where Buhari travelled to on Sunday.
The convener of the #HarassBuhariOutOfLondon protests last month, said he would be forced to begin another protest, #HarassBuhariOutofParis, should the President not return to the country where he is most needed at the moment.
The PUNCH had earlier reported that Buhari landed in Paris on Sunday for a four-day official visit to attend the African Finance Summit, according to presidential spokesman, Garba Shehu.
Shehu also said the summit would focus on reviewing the African economy following shocks from the coronavirus pandemic and getting relief, especially from increased debt burden on countries.
He added that the summit, to be hosted by President Emmanuel Macron of France, would draw major stakeholders in the global financial institutions and some Heads of Government, who would, collectively, discuss external funding and debt treatment for Africa, and private sector reforms.
However, Omokri, in a statement titled, ‘Buhari Is Needed in Nigeria, Not France’, said the President should return to Nigeria to attend to the worsening security situation in the country.
The statement partly read, “Since the Africa-France Summit was postponed, due to COVID-19, and General Buhari was informed of it, why did he still travel to Paris? This is the question Nigerians want to be answered.
“I remind Buhari that Nigeria is drifting, and if he does not drift back to Abuja to halt the drift, I may be forced to drift to Paris to #HarassBuhariOutofParis.”
“It is clear that this is not the time for Buhari to be sneaking into Paris or London to see his doctors.
“If he is too ill to continue in office, then he should resign and let capable hands move Nigeria forward,” he added.
The President had been in London, United Kingdom, last month for over two weeks. The President had gone for medical check up while doctors were on strike back at home in Nigeria.
Buhari’s ‘short rest’ at the Abuja House in London was, however, marred with the #HarassBuhariOutOfLondon protest organised by Omokri.
A counter-protest or a solidarity protest was soon organised in support of the Nigerian President and what could be described as an absurd drama was created.
While the #HarassBuhariOutOfLondon protesters had wanted the President to return to the country and fix health care, amongst others, the solidarity protesters believed the President had a right to seek medical attention abroad.
Top Stories