Following alleged cheating scandal trailing Reno Omokri, his wife has opened up on some important issues. 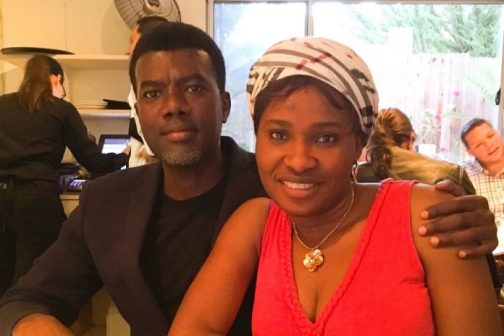 Reno and Tuokpe
Mrs. Tuokpe Omokri, the wife Reno Omokri has distanced herself from reports that she's the person who recently welcomed a baby announced by her husband.
Omokri is a former presidential aide.
Tuokpe confirmed the development to The Will on Tuesday.
She, however, reiterated that she and Reno are still legally married.
When asked if they just have a fourth child together, Tuokpe said “No”
She added that, “I am a very private person, I shy away from the media and social media. I am not going to say much now.”
The online newspaper had earlier reported that Ebele was born by a UK-based lady and not Omokri’s “rightful wife whom he married in Nigeria in both traditional and Church marriage.”
The newspaper added that “Reno, who recently initiated #harassbuharioutoflondon, was only able to do so conveniently because he absconded to London where his new partner lives, contrary to his narration of flying out to London from California for the cause.”
The report added that Reno has refused to contribute to the upkeep of his family, one of whom is a special needs child.
The report further described Reno as a control freak, who subjected his estranged wife to emotional abuse for the better part of the 14 years they lived together.
However, Omokri has denied all the allegations and vowed to contact his lawyers for advice on the next action.
Moreover, a check on Mrs Tuokpe Omokri’s Instagram page showed that she has deleted the name Omokri and replaced it with another name – Onuwaje.
Tuokpe has also deleted all Omokri’s pictures from her page.
Top Stories