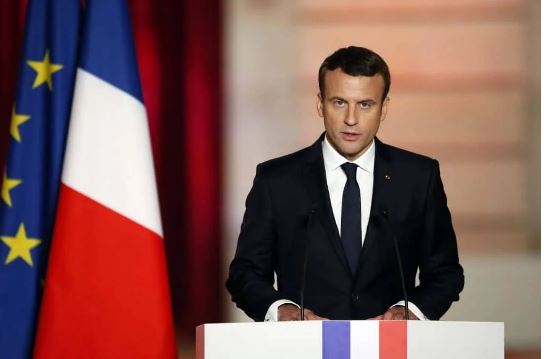 President Macron of France
President of France, Emmanuel Macron has revealed the country's intentions to help Nigeria fight its insecurity issues.
France will work with Nigeria to combat insecurity bedeviling the Lake Chad basin area and the entire stretch of the Sahel region.
Macron spoke at a bilateral meeting between him and President Muhammadu Buhari.
The meeting was hosted by the Nigerian leader on the sidelines of the Financing Africa Summit in Paris.
The French President pledged his steadfast support for the West African that is currently facing a number of security challenges.
In a statement signed by Garba Shehu, Buhari Spokesman, and made available to media houses, the French leader said that his country will “absolutely be there on the side of Nigeria and it is willing to support with everything to assist the country to overcome the security threats.”
Macron promised to help the most populous black nation in the world in confronting the challenges of COVID-19 vaccines.
He added in the statement that “President Buhari outlined the challenges all round facing the country as well as its neighbours and spoke about the steps he has taken to reignite response to the situation, which he said included the appointment of the new Service Chiefs.”
The Nigerian leader said his country was willing to work with France and all international partners to overcome the West African country’s security challenges.
Top Stories