Thugs allegedly paid and sponsored by Governor Nasir El-Rufai have been arrested by the police. 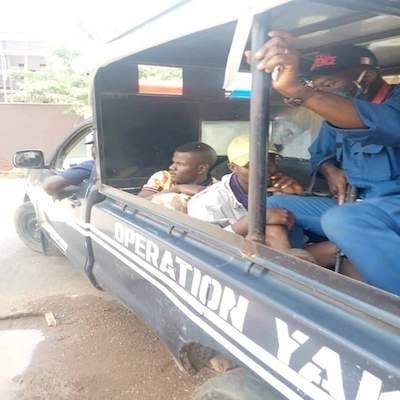 Thugs arrested in Kaduna
A number of thugs armed to the teeth have been arrested while trying to assault protesting workers in Kaduna state.
The armed thugs were allegedly sponsored by Governor Nasir El-Rufai to disrupt the peaceful protest embarked upon by the Nigeria Labour Congress (NLC) in Kaduna.
SaharaReporters gathered that the thugs were arrested on Wednesday morning by security operatives at the workers' union secretariat in Kaduna, state capital.
The workers had gathered at the location in preparation for the continuation of their protest, when the hoodlums loyal to the governor invaded the area.
The NLC had called a five-day warning strike in the state from Monday, which disrupted activities in the capital and other parts of the state.
El-Rufai on Tuesday declared the NLC president, Ayuba Wabba, and other leaders of the union wanted for “economic sabotage and attacks on public infrastructure under Miscellaneous Offences Act”.
He said there will be a “handsome reward” for anyone who knows the whereabouts of the union leaders.
A procession by members of the NLC who were on a peaceful protest was also disrupted by thugs on Tuesday.
Top Stories