A notorious leader of an armed robbery gang has been killed by the police in Ebonyi state. 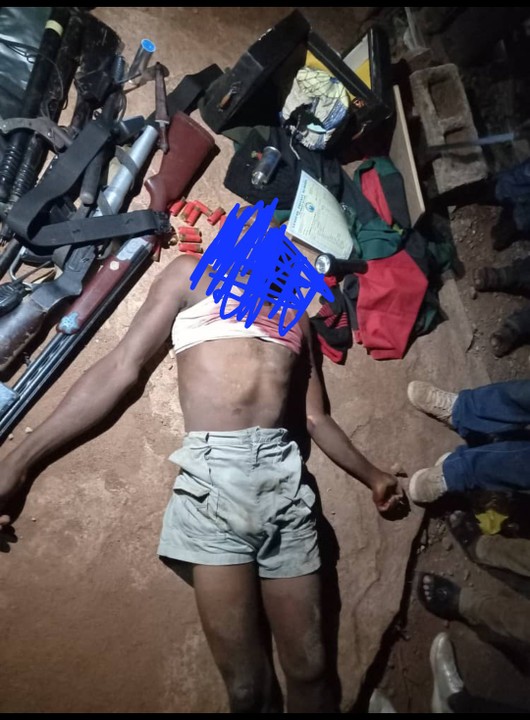 Blood killed by the police
Policemen in Ebonyi have gunned down a notorious leader of an armed robbery gang identified as 'Blood'.
The police while confirming the news on Monday, said it also arrested two suspected armed robbers, Eluu Ekpehu Emmanuel and one other who allegedly have been terrorizing Isu community, in Onicha LGA, of the state.
The Commissioner of Police, Ebonyi State Command, CP Aliyu Garba, made this known in a statement signed made public by PPRO, Loveth Odah.
He said that the gang leader ‘Blood’ was the masterminder of the various attacks on three Police Divisional Headquarters in the area, namely Onicha, Abaomege and Ohaozara LGAs of the state.
According to him: “Ebonyi State Police Command has resolved to rid the State of criminal elements and frustrate their activities.
“This is following the successful arrest of two male suspected armed robbers as well as recovery of Firearms, ammunition and other incriminating items from their house in Isu Onicha Local Government Area of Ebonyi State.
The commissioner stated further that the command has through intelligence reports discovered that there is movement of arms and ammunition to Isu community in Onicha LGA of the state.
“On the 20/05/2021, at about 1700hrs following the Intelligence report of movement of arms and ammunition and the report of armed robbers terrorizing Isu, Onicha LGA, One Eluu Ekpehu Emmanuel was arrested, who made useful statement to the Police and led Police Operatives to the house of their gang leader popularly known as “Blood” other names unknown who is alleged to have been terrorizing the area and the master minder of the various attacks on three Police Divisional Headquarters in the area, namely Onicha, Abaomege and Ohaozara.
“Blood and his cohorts on sighting the police, opened fire on the Operatives who gallantly fought back, in the process Blood was apprehended with gunshot injuries while others escaped into the nearby bush with bullet wounds.”
The commissioner added that Bloods house and premises were immediately searched and dangerous weapons were found.
Items recovered according to the police includes; One (1) Double Barrel English Gun, with eleven live cartridges, One (1) Locally made Single Gun, One (1) Riot Police Smoke Gunner, stolen from Ohaozara Police Divisional Headquarters when the division was attacked.
Other items are; Three (3) Police Bartons, One (1) Hand Grenade, One (1) Canister of Teargas, Two (2) Police Belts and two (2) Police Radio Communication Handset with Chargers, which according police were all Stolen from Onicha Divisional Headquarters that was also attacked and set ablaze by unknown gunmen.
CP. Garba further alleged that the gang which Blood was a leader are responsible for the attacks on government facilities and the killing of security agents in the state.

On the 20/05/2021, following Intelligence report, One Eluu Ekpehu Emmanuel was arrested, leading to arrest of their gang leader popularly known as "Blood" alleged to have been terrorizing the area and the master minder pic.twitter.com/FEPDwpyY2p