Native Doctor Calls Out His Baby Mama For Brutalizing His Mother


In a post addressed to his children, he noted that they may not get to see their grandmother again because her health is failing her as a result of the beatings she received from his baby mama while she was ill. 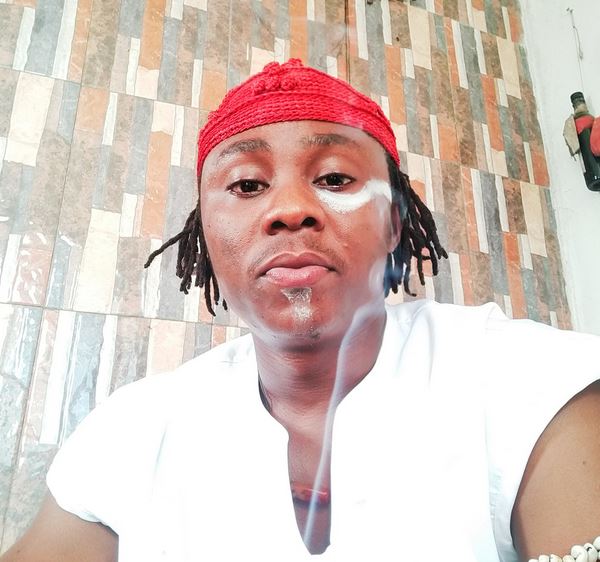 Ossy Opara, a Nigerian native doctor, took to Facebook to call out his baby mama for beating his mother and accuse her of planning to set him up so he would not be able to see his kids.

In a Facebook post addressed to his children, Ossy noted that they (children) may not get to see their grandmother again because her "health is failing her as a result of the beatings she received" from his baby mama, Blessing, while she was ill.

Promising that his children will hear about how he was a "daredevil", the native doctor promised not to indict himself in any way.

This is the last children's day that you will celebrate with me by proxy in an inhumane way. It is likely that you may not meet your grandmother (my mom) alive when you come back, I tried to make you see your grandmother today (her health is failing her as a result of the beatings she received from your mother Blessing ontop her health condition).

I tired so hard and made calls that I wasn't supposed to make, all for the love of family. The internet never forgets.

I will not indict myself in anyway, but you will hear the story of how your father is a Daredevil, you will look at me and be proud to have a father, an only son that conquers multitude of brethren. Ochubara dike n'ohia, that's what you will call me.

It is a challenge, and a promise. A mortal one, till I die." 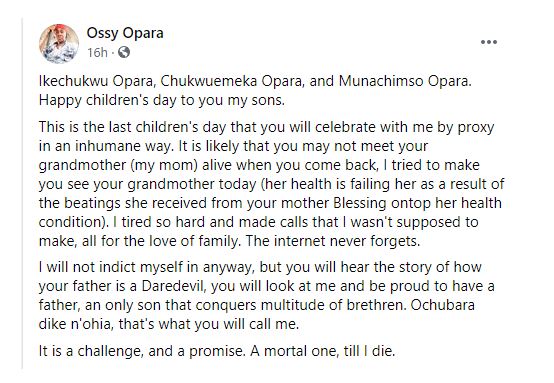 Prior to this, Ossy had narrated how his plans of celebrating children's day yesterday May 27, with his kids was stopped by the family of his baby mama who demanded that he comes to their family house for the visit.

He claimed that they "want to him when to talk and when to leave" and allegedly "set him up again."

2 weeks ago (early notification), this father has been demanding that his children be peacefully brought out for him by those who have seized them. This father wants to celebrate children's day with his children and return them afterwards, and must be able to be with them again whenever he wishes to.

This father will not be made to do it inside that house at world bank where he was tagged a kidnapper. This father's session with his children will not be regimented and supervised again.

IF MY DEMANDS ARE NOT MET, then this father has been DARED and PUSHED to the wall.

for every ACTION in nature there is an equal and opposite reaction. In other words, forces result from interactions. 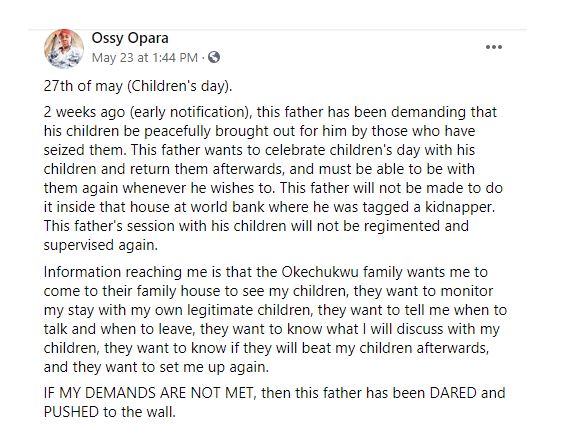