A Federal Polytechnic, Nekede student has been detained for weeks after being accused of being ESN member. 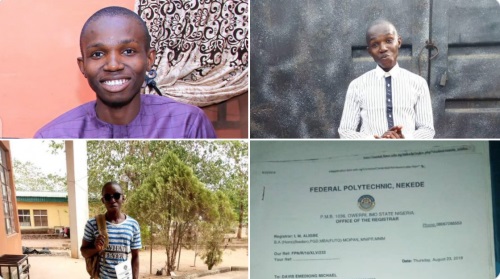 Emediong
A National Diploma 2 of the Federal Polytechnic, Nekede, Imo State has spent weeks in police detention after being accused of belonging to the Eastern Security Network.
According to Sahara Reporters, Emediong Davis was among those arrested after a police raid on May 13.
Davis, a student of Electrical and Electronic Engineering, also does art works for people and was on his way to deliver an artwork to a client when he and his friend were rounded up.
SaharaReporters gathered that the families of the two boys were searching for them after the police took him away and ordered their phones switched off.
Weeks later, Davis’s family members said they saw him on the state television being paraded as an ESN suspect.
A Twitter user, @Truthfully83, brought the matter to the Police Complaint Response Unit who promised to investigate the incident.
He said, “EMEDIONG DAVIS is an ND 2 student of Fed Poly Nekede. He returned home on the 12/5/21, due to the prolonged strike of (ASUP) but was KIDNAPPED by the @PoliceNG on the 13/5/21. Unknown to his family, an incident which I can describe as one of the worst forms of human rights violations.
“Davis, who is studying Electrical Electronics Engineering, with Reg. No 18/0071/EE, also does Fine Arts works, and paintings, as side hustle, to support his poor parents in his education. He went out to deliver an artwork, but has been missing till date.
“On the 13/5/21, a day after returning from school, Davis went to Obot Akara Local Government Area to deliver an art work which he made for a family residing there, who had contracted him earlier for it. He was conveyed in a motorcycle, by a friend, Saturday Okon Job, who accompanied him.
“They both disappeared into thin air, without any trace. Their phones were switched off, & their lines went dead. They were both missing for days. The families of Emediong Davis, & Saturday Okon Job, went all over Akwa Ibom state, searching for the two young men. But got no hope.
“Both families who reside in Ekot Ekpene, went to different hospitals, mortuaries, @PoliceNG stations around Akwa Ibom state, in search of their loved ones. They even went to the @PoliceNGHeadquarters at (Ikot Akpan Abia) but were told that they weren't there.
“@aksgovt, six says after a fruitless search, the family saw this newspaper publication, where @PoliceNG had arrested Emediong Davis and Saturday Okon Job on their way to Obot Akara to deliver the art work, and branded them members of IPOB/ESN, that they raided in a camp.”
On Monday, SaharaReporters had reported that the May 30 Biafran Remembrance Day dug out the profiles of some of the residents who were raided by the police and the army, labelled and paraded as belonging to IPOB or its militant arm, the Eastern Security Network.
A report by the International Society for Civil Liberties and Rule of Law, a civil society and research group had detailed that in the past one week, “not less than 30 open and secret killings by soldiers and police had taken place with most in Imo State where scores of corpses have been freshly traced to the mortuaries of the government medical centres.”

Davis, who is studying Electrical Electronics Engineering, with Reg. No 18/0071/EE, also does Fine art works, & paintings, as side hustle, to support his poor parents in his education.
He went out to deliver an artwork, but has been missing till date.@NhrcNigeria @PoliceNG_CRU pic.twitter.com/GNESpnMbT0