Onuachu has won the Ebony Shoe award for the Best African player In Belgium for the 2020/21 season. 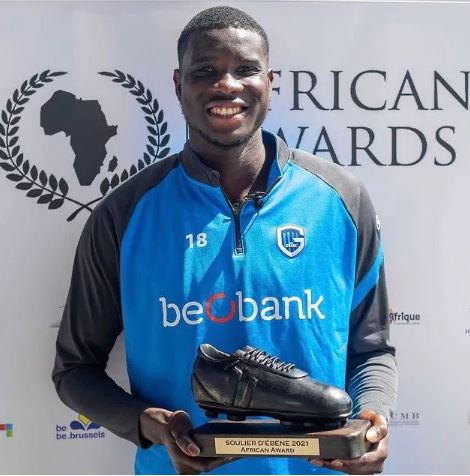 Paul Onuachu
A fantastic season with Genk has seen Nigerian footballer, Paul Onuachu bag a new international award.
He has won the Ebony Shoe award for the Best African player In Belgium for the 2020/21 season.
The Nigeria international succeeded Antwerp and Congo Democratic Republic forward Dieurmaci Mbokani as the winner of this year’s award.
The 27-year-old was top scorer in the Belgian Pro-League with 29 goals in 33 appearances. He scored four times in five games in the Jupiler Pro League PlayOff and once in the Beker van Belgie to bring his total tally to 35 in 41 games.
The striker is the fifth Nigerian to win the award after Daniel Amiokachi (1992,1994), Victor Ikpeba (1993), Godwin Okapara (1995) and Celestine Babayaro (1996).
Onuachu beats his Genk teammate Théo Bongonda who scored 18 goals and bagged six appearances in 39 games in all competitions; RSC Anderlecht’s duo of Albert Sambi Lokonga who scored just thrice in 37 games in all competitions, Lukas Nmecha who scored 21 times in 41 games and Club Brugge’s Angola defender, Clinton Mata who scored once in 49 appearances.
The Ebony Shoe award is a football award in Belgium given annually to the best African or African origin player in the Belgian Pro League.
Top Stories