In this exclusive interview, the single mother of two talked about her career, love, sex and marriage. 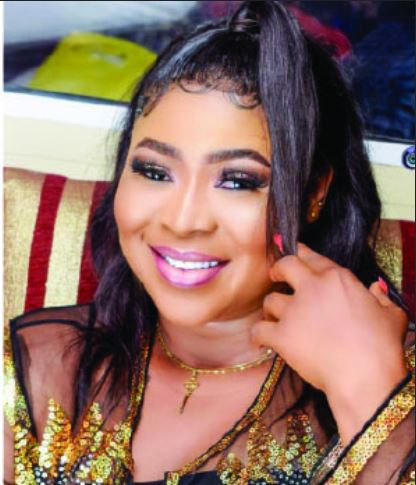 A woman who is gifted with the talent to crack jokes, Angel Emeka earned herself first movie role a few years ago, and since then she has not looked back.

In this exclusive interview, the single mother of two talked about her career, love, sex and marriage. Enjoy it.

How did you get into the movie industry?

A costumier of mine who is a Nollywood script supervisor by name, Ebuka, may his soul rest in peace, came to my boutique with his friend, Chinedu Arinze, a location manager. They came to buy some stuff and I cracked them up, they laughed all day and told me that I can do well in the film industry. I laughed at them and had a flash back on what my mom always told me that she sees me as an actress in future, and since then I have always dreamt of it. So, I decided to give it a trial, and I went with them to the movie location in Asaba where they introduced me to a movie producer called, Solo Amaco, who gave me a role instantly to act with Joyce Kanu. I was so much scared of acting with her because that was my first time of meeting her, and I started crying due to the fear in me. But Madam Joyce Kanu noticed it was my first time and she consoled me and gave me the courage never to be scared. Being a market fight scene, she asked me to see her as my friend and fight her as if we’re fighting for real, which I did in fear and the job came out well.

How was your growing up?

Growing up wasn’t easy for my siblings and I, because we lost our dad at an early stage; but my mom is a strong woman. May God keep her for me!

What was the first movie or series you acted in?

The first movie I acted in was Hour of Tears.

What were the challenges you faced when you first got into the industry?

It’s not easy to have a break when you’re new because the producers and directors do not know how good you are. So, many of them find it very difficult to cast you in a movie, but I prayed for God’s favour, which has been working for me till now.

What’s the biggest sacrifice you’ve ever made for your career?

My kids and my business, I don’t joke with these two. I love spending quality time with my kids and anyone that knows me very well will also tell you that I am a business tycoon and an entrepreneur, but my career has taken most of my time.

How many movies have you acted in so far?

I can’t recall exactly the number because I stopped counting six years ago.

What current projects are you working on?

I am working on my personal movie titled, Highlander, which is on post-production. I also finished a movie project, which I produced last month and it’s currently airing on YouTube as we speak. The title is Village Jagaban.

Whats your first experience in front of the camera, were you nervous?

I wasn’t nervous, because Joyce Kanu carried me along. But in my second movie, I was nervous because an actor made the set so uncomfortable for me. He shouted at me, saying I was not acting well, which made me cry like a baby. I ran to my car and went home because the shame was too much for me. However, the director made him to understand that I was new in the game and he felt bad, apologized and encouraged me to be stronger. Today, he is my bestie.

What were you doing before this and what was the experience like?

I was into importation of red wine, and boutique business. I was enjoying it because business is my thing as well.

What was the turning point in your career?

When I produced my first movies, Love From Panya and Dino`s Family.

I go for vacation with my kids, visit the zoo and chill with my girls.

What quality or sexy part earned you your first movie role?

It’s my Chinese baby face, bowlegs, hard work as well as my size. Amaco gave me the first role because of my body size. He needed someone big that can fight Joyce Kanu and I fitted into the character.

Which movie gave you the big break?

Assembles of God and Ghetto University.

Most men can hardly get their eyes off you; how do you cope with them?

I end up making them my friends because we may end up doing businesses together. All my life I prefer making men my friends.

What is the craziest thing a male fan or admirer has done to you?

One of my male fans poured chocolate ice cream on me while trying to take picture with me. It was fun, but crazy.

How do you intend to break into the A-list in this highly competitive industry?

I’m focused on my talent; with God by my side, I know I will get to the top.

As a soon-to-be-married actress, what is your stand on divorce?

Broken marriages have nothing to do with the movie industry, just pray God to keep your home. Marriages break up on daily basis not only in Nollywood.

Is marriage far or near for you?

I now want to focus on my career because my first marriage wasn’t fun and I am not fully healed.

Have you said no to marriage proposal?

Yes, I’ve said no to many because I am not ready for marriage yet.

Now, how would you safeguard your next marriage?

I will do everything possible to keep my marriage when the time comes. Marriage is sweet when you marry your man, a man that will love and endure you as his queen, and you respect and submit to him as your king.

What does sex mean to you?

Sex means nothing to me because I am not a sex freak. I can stay for five years without sex, as long as my business is doing well and my kids are happy.

There are women who cannot get their eyes off a sexy lady like you; do you also have women that woo you?

Yes, but I don’t give room to that madness.

Are you in a relationship now?

I am not in any relationship for now. I am still very much single. I am a single mother.

What are the qualities you desire in a man?

He must be handsome, God-fearing, humble, loving, caring, and well dressed.

How do you handle sexual urge especially now that you’re not in any relationship?

I am not a sex freak; the only thing that freaks me is money.

Do you have men asking you to be their second wife?

Yes, many times, but I believe in one man, one wife.

Can you marry a man much older than you?

No! I don’t like old men. When I was much younger, I had a bad experience that made me not to give any old man a chance to my heart. So, I don’t see myself marrying someone much older than me except It’s the will of God.

How would you advise young people who want to go into acting?

They should be focused and consistent because acting needs a lot of time if you really want to make it in the movie business.