Aboubakar Hima is wanted in a case of criminal conspiracy, contract scam, misappropriation of public funds by the EFCC. 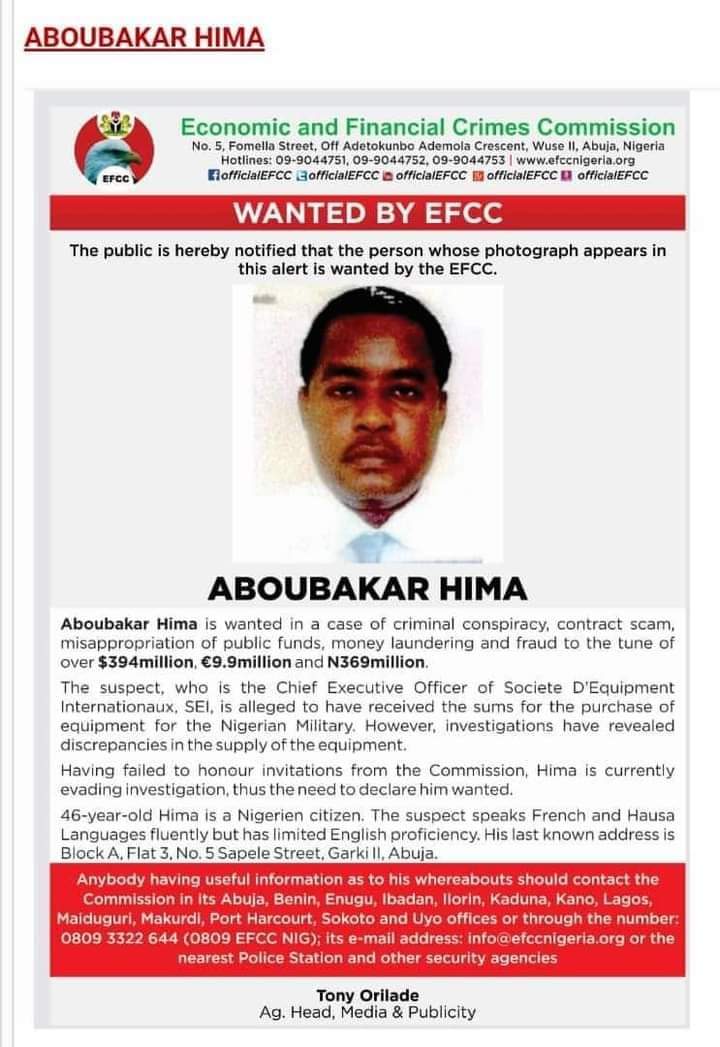 Hima
A man from Niger republic, Aboubakar Hima has been declared wanted for allegedly eloping with billions supposed to be used in the purchase of arms for the Nigerian army.
He was declared wanted by the EFCC in a press release.
The statement reads:
WANTED BY EFCC
The public is hereby notified that the person whose photograph appears in this alert is wanted by the EFCC.
Aboubakar Hima is wanted in a case of criminal conspiracy, contract scam, misappropriation of public funds, money laundering and fraud to the tune of over $394million. €9.9million and N369million. The suspect, who is the Chief Executive Officer of Societe D'Equipment Internationaux. SEI, is alleged to have received the sums for the purchase of equipment for the Nigerian Military.
However, investigations have revealed discrepancies in the supply of the equipment. Having failed to honour invitations from the Commission, Hima is currently evading investigation, thus the need to declare him wanted. 46-year-old Hima is a Nigerien citizen. The suspect speaks French and Hausa Languages fluently but has limited English proficiency. His last known address is Block A. Flat 3. No. 5 Sapele Street, Garki II, Abuja.
Anybody having useful information as to his whereabouts should contact the Commission In Its Abuja, Benin, Enugu, lbadan, Ilorin, Kaduna, Kano, Lagos, Malduguri, Makurdi, Port Harcourt, Sokoto and Uyo offices or through the number: 0809 3322 644 (0809 EFCC NIG); its e-mall address: [email protected] or the nearest Police Station and other security agencies
Tony Orilade
Top Stories