NADECO begged the UN to stop Nigeria from going into another civil war. 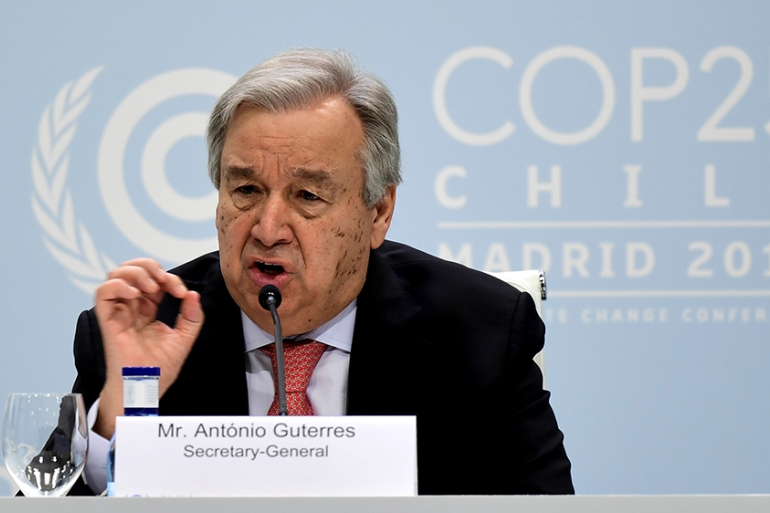 UN Secretary-General, Antonio
The National Democratic Coalition (NADECO) has sent a save-our-soul message to the United Nations.
NADECO begged the UN to stop Nigeria from going into another civil war.
In a letter signed by Ayo Opadokun, NADECO general secretary, and addressed to the secretary-general of the United Nations (UN), the group blamed the current situation of Nigeria on the “imposed centralist and unitary 1999 constitution” forced on Nigerians by the military.
The group said calls for secession by some groups in the country were a result of mutual distrust between ethnic groups and inequitable treatment by the current administration.
The group also said Buhari has rejected all pleas made by Nigerians for the country to return to the independence constitution negotiated by the nation’s founding fathers.
“We, the National Democratic Coalition, on behalf of Nigeria write to formally request you to use your good offices to take immediate and concrete steps to halt the fast deterioration of national security and political stability in Nigeria,” it said.
“Nigeria’s current situation is so deplorable because of the imposed centralist and unitarist 1999 constitution which was manufactured by a military clique and imposed upon us.
“Ethnic Nationalities who were the building blocks upon which the British Colonialist constructed Nigeria had clamoured, appealed and cautioned the sectional military wing ruling Nigeria (foisting Obasanjo and Jonathan) as surrogates, for Nigeria to return to Federal Constitution upon which Nigeria secured its independence in 1960 but their interventions had always been met with disdain and provocative responses. Nigerians have never accepted the suspension, and abrogation of the negotiated Independence Constitution.
“Agitations for a return to Federal Constitutional Governance, using the 1960 and 1963 Independence and Republican Constitutions as the working papers have been very loud, persistent and popular by Ethnic Nationalities and others with the youths of the South and the Middle Belt who constitute about 65% of the latest statistics of Nigerian population have resorted to street actions leading to political instability, incohesion and mutual distrust that are worse than what the situation was before the Nigerian Civil War between 1967-1970.
“We are appealing to you to take appropriate steps to help Nigeria resolve the dangerous paths the country is treading now. Political upheavals, instability, another civil war are better prevented now by the international community because it will cost you far less if you prevent the possible eruption of open hostilities in Nigeria.
“This is also because anything that happens in Nigeria will have unwholesome and negatively impactful consequences on the West Africa Sub-Region, the African continent and the global community. Our request is urgent and timeous.”
NADECO asked that there should be no more elections under the 1999 constitution until a return to the 1960 and 1963 federal constitutions to which Nigerians subscribed to at independence.
“In all the circumstances of this matter, NADECO has no alternative but to join in the insistence that there better be no more elections under the 1999 so-called Federal Constitution, until we return to the negotiated 1960 and 1963 Federal Constitutions to which Nigerians subscribed at independence and when we became a republic,” it said.
Top Stories