It was gathered that the walls of the supermarket, situated along the old Ogwashi Uku-Benin Road, collapsed as a result of the intensity of the inferno. 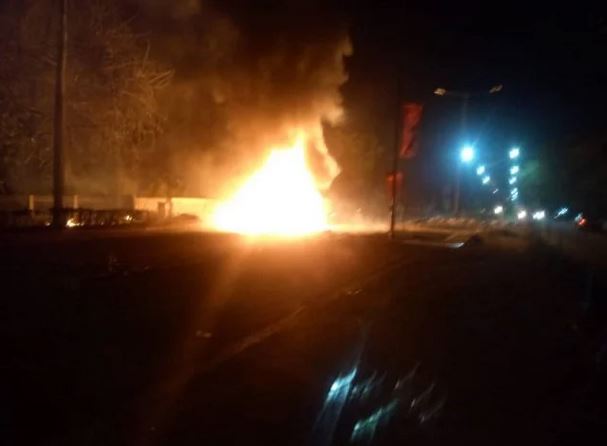 In what will come across as a really heartbreaking development, the owner of Sylverson Supermarket in Ogwash-Uku, Aniocha North Local Government Area of Delta State, collapsed on Tuesday as fire gutted the facility, which is the largest supermarket in the community, and destroyed goods worth millions of naira.

PUNCH Metro reports that the walls of the supermarket, situated along the old Ogwashi Uku-Benin Road, collapsed as a result of the intensity of the inferno

The owner of the supermarket was said to have slumped on hearing about the incident and was rushed to hospital, where he is said to be recuperating as of the time of filing this report.

Eyewitness told our correspondent that firefighters from the state fire service in the town were handicapped when distress calls were put across to them.

One of the eyewitnesses said, “The engine of their operational truck could not start; firefighters, who later visit the scene, could not gain access into the building as the entrance door was under lock and key.

“The fire started around 3am and efforts made by sympathisers to salvage goods were unsuccessful due to the intensity of the fire.

“The fire was so tense that it became difficult to salvage anything from the supermarket to the point that the walls collapsed; everything inside was completely burnt.

The Director of Fire Service in the state, Mr Eugene Oziwele, who later visited the scene, said it would be premature to draw conclusions on the cause of the inferno.

He said his men met a brick wall as they could not enter into the supermarket because of the iron door that was heavily padlocked.

“I was told that the operators make use of generators every day; we are still investigating the incident,” he said.

Oziwele explained that the explosions that later followed were caused by cans of insecticide and perfume bottles, the contents of which were highly inflammable.