Bridge collapses in US
At least five persons were rushed to the hospital after a bridge collapsed onto a Washington highway in US.
However, the hospitalized victims sustained non-life-threatening injuries.
The incident occurred before noon on Wednesday, June 23,  on DC-295 near Polk Street.
The collapse was caused by a collision, D.C. Deputy Mayor for Public Safety Chris Geldart said during a press briefing Wednesday afternoon.
Based on the preliminary investigation, a truck carrying diesel fuel may have collided with the bridge, causing it to separate from its mooring, he said. Multiple cars were then involved in the crash, with five people in those cars transported to local hospitals, he said.
"Everything we see on the accident scene right now leads to this being a collision pulling the bridge off its mooring," said Geldart, who noted they were "very lucky" there weren't any serious injuries.
Images from the scene show a truck crushed under the bridge which was completely detached from a staircase and platform at one end.
The crash investigation and bridge removal could continue through Thursday, with traffic on the highway halted in both directions, Geldart said.
Officials initially said there were no structural concerns with the bridge when it was last inspected in February. But Geldart later issued a statement that they had "misstated the condition" of the bridge.
A May 25 inspection report gave the bridge a rating of "poor condition," prompting a plan to replace the bridge, he said.
The bridge still had "good structural integrity," and the rating was due to the decking, the part of the bridge which people walk over, Geldart said during a press briefing Wednesday night.
The bridge is now believed to have collapsed due to a collision with the truck's boom, which had not been lowered after the driver left a nearby construction yard, he said. 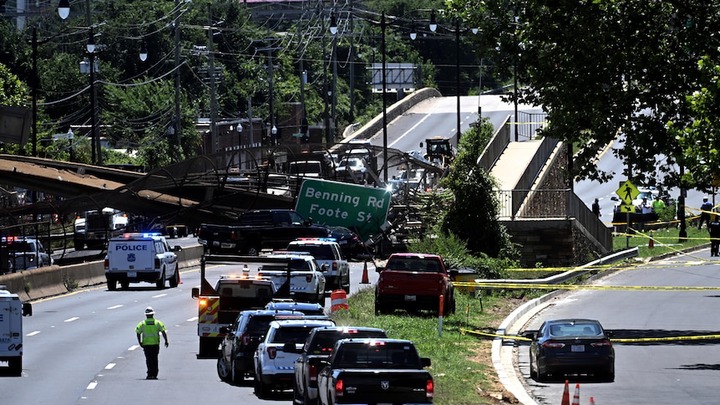 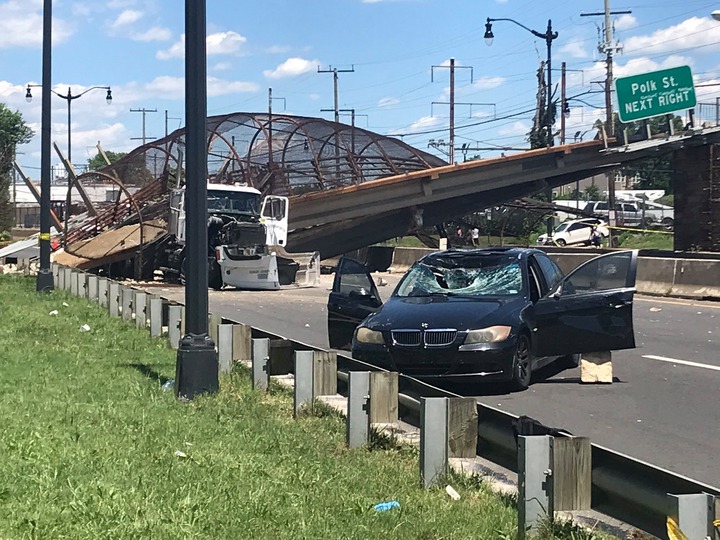