On­yekachukwu, who was arrested by the Force Intelligence Response Team, led by Abba Kyari, was reported missing on June 16, 2021, by his brother, identified as Prosper. 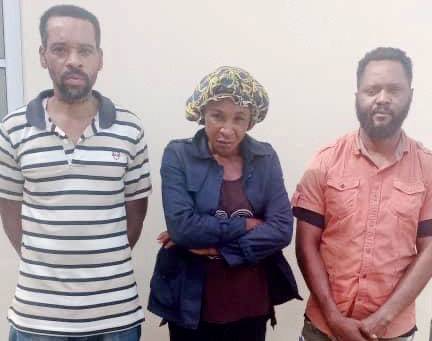 According to a report by SaharaReporters, the police have apprehended Pastor Richard On­yekachukwu for allegedly faking his kidnap.

On­yekachukwu, who was arrested by the Force Intelligence Response Team, led by Abba Kyari, was reported missing on June 16, 2021, by his brother, identified as Prosper.

Proper claimed the pastor had been kidnapped and that the perpetrators had already opened a phone line conversa­tion with them, demanding a huge amount of money before he could be set free.

In the course of the investigation, the IGP team visited the house of the victim and met his wife, who looked unperturbed as if noth­ing sinister happened to her or her husband.

At that point, the operatives deceived her by telling her af­ter introducing themselves as policemen that they were on an investigative mission in an al­leged case of armed robbery against her husband, a police source said.

It was revealed that, at that point, the lady shouted in be­wilderment and told the police that her husband was not an armed robber but had traveled to Taraba state, adding that he went for a business trip.

She further told the opera­tives that she saw her husband about a week ago but that his family members thought he had been in captivity at the kidnappers' camp for three weeks.

At this point, she was arrest­ed for further interrogation. At the station, she confessed that the entire saga was a planned and orchestrated self-kidnap.

She confessed that her hus­band brought the idea and that she played along.

According to her confes­sions, her husband had finan­cial challenges.

She said that he was look­ing for a way to raise money to pay off the loans he collected.

"He wanted to collect the money and pay up his debt," she told the police, adding that her husband was due to visit the house.

Armed with all this infor­mation, the police laid an am­bush for which led to his arrest the next day, being June 18.

Following his arrest, Pastor Richard made a confessional statement that also led the po­lice to arrest his friend, Enoch.

According to the police, Enoch posed as one of the kid­nappers, who was assigned the responsibility of asking for the ransom money.

Onyekachukwu said, "I am from Idemili South Local Government Area. I am the second child in a family of seven. I am a pastor and contractor. I had a big church, but the roof was blown away by the wind. The name of my church is Resurrection Pow­er Church. I took some loans to assist the businesses that I was doing to support the min­istry. It was about N600,000:00.

"Due to this, I found myself in financial challenges. At the same time, paying the loan became difficult. I made some losses in my poultry business and the COVID-19 pandemic did not help matters.

"The banks were after me and I didn't know what to do. I was thinking of getting money from my younger brother, Prosper, a rich civil servant, to offset the loan be­fore I was dragged to court. It wasn't easy; that was why the thought of self-kidnap came to me. I don't know why I decided to use that strategy.

On why he requested that his brother, Prosper must bring the ransom personally, Richard said, "I have no par­ticular reason to ask that my brother, Prosper should bring the money. I never even thought of that as an issue. This is something I thought would end within the family. I planned to inform him after some time.

"I demanded N10million, and they bargained to N5 mil­lion and finally N2million. We were still waiting to hear from him when police arrested me at home."

Mary Onyeka­chukwu, the wife said, “We live in Maraba, Nasar­awa State. I am a petty trader. My husband told me that he would be travelling on a busi­ness trip on May 20. After some days we could not reach him again. I called his brothers and explained to them. They said I should relax,  that he will come. It took about three days before someone called to say that my husband had been kidnapped and they were demanding N10million. After a week, he came back.

"I met him as a pastor and I was taught to be submissive. I was just submissive; it is not about love but obeying the word of God. I don't have any words to justify myself. I am finding it difficult to forgive myself."