A court has jailed two undergraduate students for engaging in a love scam. 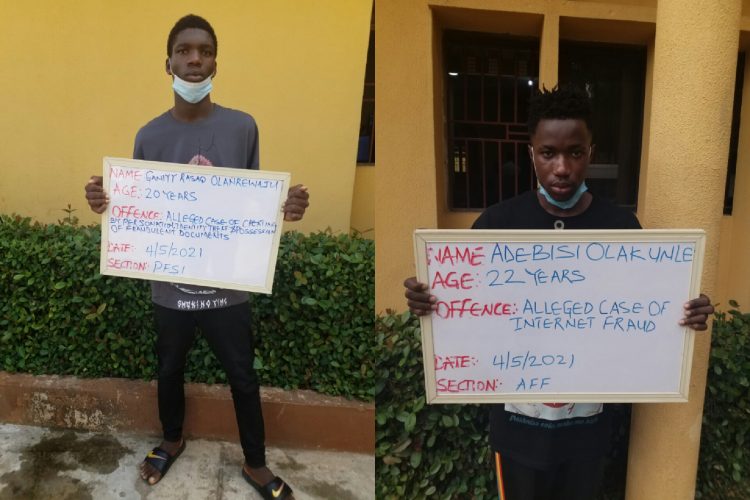 The love scammers jailed
A 300 Level Student of University of Ilorin (UNILORIN), Ganiyy Rasaq Olarewaju and Olakunle Adebisi, an ND II student of Kwara State Polytechnic have been jailed for engaging in scam.
The duo were jailed by Justice Mahmood Abdulgafar of the Kwara State High Court sitting in Ilorin on Thursday.
They were accused of love scam by the Ilorin Zonal Office of the Economic and Financial Crimes Commission, EFCC.
The anti-graft agency had on Monday, June 28, 2021 arraigned Ganiyy and Adebisi on one count separate charge, to which they pleaded guilty.
Upon their pleas, counsel to the EFCC, Sesan Ola called two witnesses – Dagogo Urowayino and Shetima Yusuf against Rasak and Adebisi, respectively to review the facts of the cases.
The two witnesses narrated how the defendants were arrested and tendered several fraudulent messages printed from their emails.
The documents and the defendants’ phones were later admitted in evidence, following which the judge adjourned until today for judgment.
In a separate judgment on the two cases today, Justice Abdulgafar while relying on the evidence placed before the court, the testimonies of the prosecution witnesses and the plea of the defendants, pronounced them guilty and sentenced them accordingly.
While Adebisi was sentenced to six months, Ganiyy bagged one-month imprisonment, to be observed at Mandala Correctional Centre, Ilorin.
However, the judgment allowed the suspension of the sentencing for the two convicts.
According to the judge, Adebisi would commence serving his term after two years when he must have graduated from the Kwara State Polytechnic, while Ganiyy sentencing would commence after one year when he must have finished his studies in the University of Ilorin.
The sentence is without option of fine for the two convicts.
Top Stories