'I Gave The Name APC to the Ruling Party' - Okorocha


A Nigerian senator and former governor has made a startling revelation about the name of the ruling party. 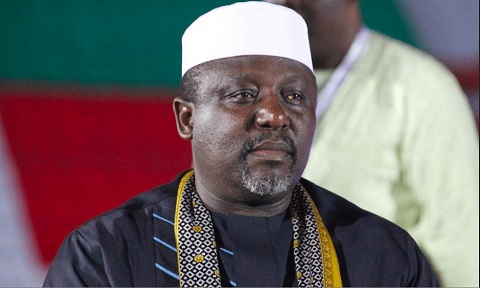 Rochas Okorocha
A former governor of Imo State, Senator Rochas Okorocha has claimed that he is the one who gave the ruling party its name: All Progressives Congress (APC).
The Senator and Presidential hopeful, who spoke at the National Secretariat of the party in Abuja on Tuesday when he led the Imo APC pioneer group to meet with members of the Caretaker/Extraordinary Convention Planning Committee, also posited that any Congress conducted in Imo State outside the Chief Daniel Nwafor-led state caretaker executive would be illegal.
According to him, Nwafor Exco has won all the cases against its dissolution to the Appeal Court and has not been overturned.
Okorocha, who was in the company of Sen. Ifeanyi Ararume, Ugwumba Uche Nwosu, Sir Jude Ejiogu, Hon. Pascual Obi, Hon. Ugonna Ozuruigbo, Hon Kingsley Uju, Hon. Dan Nwafor, Dr. Chidinma Uwajimogu, Barr. Steve Asimobi, Chief Stanley Nzekwe, amongst others, decried the treatment the pioneer APC members are receiving in Imo State.
He called on the Caretaker Committee to make sure that the party was restored back to its dignity in the state.
Top Stories