The President, Nigerian Baptist Convention, Rev Israel Akanji, said this in an interview with PUNCH on Friday, which he said was the last day of the Baptist World Alliance. 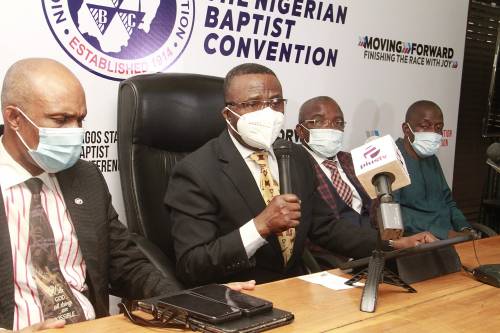 According to SaharaReporters, the Nigerian Baptist Convention has slammed President Muhammadu Buhari’s government, saying this is the first time in 166 years of establishment that a Baptist school would be attacked by bandits and students abducted.

Following the abduction of 121 students of Bethel Baptist High School in Kaduna State, the Nigerian Baptist Convention said it had started organizing prayers in all Baptist churches in Nigeria and abroad.

The President, Nigerian Baptist Convention, Rev Israel Akanji, said this in an interview with PUNCH on Friday, which he said was the last day of the Baptist World Alliance.

Akanji said the alliance comprised 127 countries globally and that the event was held via Zoom, a virtual meeting platform.

The clergy said the 127 countries that make up the Baptist World Alliance were informed of the abduction of students of the Bethel Baptist High School.

Asked what efforts the Baptist Church had made so far, the clergy said, “You know that we are a church, and once we are in any difficulty, the first port of call is to ask God in prayer. Therefore, we have been organizing prayer all over the Baptist Church in Nigeria and worldwide.

“In terms of publicity (of the abduction), all over Nigeria, it is known. Every state is aware, and the Baptist World Alliance is also aware.

“In fact, Elijah Brown, the General Secretary of the Baptist World Alliance, has made a kind of press statement in which he spoke about the abduction of the students in Nigeria. He condemned this act that has been going on in Nigeria and especially the kidnapping of the students of our Baptist High School.”

He said, “The Baptist denomination has given education to Nigeria since 1855. For 166 years now, the Nigerian Baptist Convention has been providing education.

“Our first institution is the Baptist Academy in Lagos, which is still an institution to reckon with today and has produced great men and women for Nigeria. The Baptist Boys High School in Abeokuta, Ogun State, produced Chief Olusegun Obasanjo and the late Chief MKO Abiola. These are people who greatly impacted Nigeria.

“Now, in our history, this is the first time in 166 years that a Baptist school would be raided and the students kidnapped. It had never happened. So we believe in the strength of our history. By calling the Almighty God, our students shall be returned to us.

“Having called on God and our track record as a denomination providing education for this nation without ceasing for 166 years, our students should be brought back,” he added.