The NIA has gotten N4.87 billion to intercept, monitor calls and messages on mobile devices, including Thuraya and WhatsApp 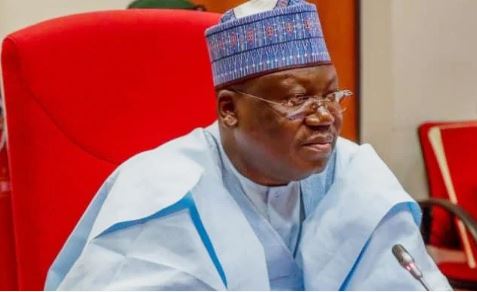 Senate President, Ahmad Lawan
The National Intelligence Agency has gotten approval of N4.87bn budget from the National Assembly to track, intercept and monitor calls and messages on mobile devices, including Thuraya and WhatsApp, according to a report by Punch.
The report further stated that the amount is part of the N895.8bn supplementary budget submitted by President Muhammadu Buhari, last month and approved by both chambers of the federal parliament last week after increasing it by about N87bn.
The budget according to the Chairman, Senate Committee on Appropriation, Senator Barau Jibrin, is meant to procure equipment for the military and to fight further spread of COVID-19.
Details of the supplementary budget obtained by our correspondent revealed that the NIA would spend N2,938,650,000 on the Thuraya interception solution, while the WhatsApp interception solution would gulp N1, 931,700,000.
Apart from this, the NIA got additional N129m to enable its personnel embark on foreign training.
The Defence Intelligence Agency, on its part, got a capital vote of N16.8bn to provide infrastructure, cyber intelligence centre/laboratory, independent lawful intercept platform (voice and advanced data monitoring) and tactical mobile geological platform.
Out of the N33.6bn approved for the Federal Ministry of Police Affairs as recurrent expenditure, the sum of N200m has been set aside to fumigate 19 police training institutes across the country.
The sum of N4.1bn was set aside for the feeding of trainees, while their allowances and salaries would gulp N910m.
Teaching allowances for training and support staff was put at N257m, while monitoring and evaluation of training would gulp N582m.
The Nigeria Police Force will also spend N2.2bn on other logistics and consumables.
In its capital component, the Federal Ministry of Police Affairs will spend N8.5bn to procure ballistic helmets, bulletproof vests and utility vehicles.
The Police Affairs ministry also got N22.5bn vote to procure drones, ammunition, discreet intelligence equipment and other requirements.
The Defence Headquarters got N3.7bn to take care of additional 2,700 troops and execute the Cimic Quick Impact project, among others.
The DHQ, in the capital component of the budget, got N33.6bn to buy arms, ammunition, vehicles, generators, combat motorcycles, communication equipment and clothing, among others.
The Nigerian Army headquarters got a total N 1.590bn as ration cash allowance/operation allowances, petroleum oil lubricants, contingency, monitoring and training, among others.
The capital vote of the Army headquarters is put at N207bn to buy arms, ammunition, vehicles, surveillance equipment, body armour/protection and all classes of tyres, among other equipment.
The breakdown of the supplementary budget further showed that the Nigerian Navy got N5.9bn to fuel capital ships and Helo.
The Nigerian Navy, however, got a capital vote of N157.7bn to procure vehicles, arms, ammunition, power supply, general hardware, body armour/protection, surveillance equipment and other requirements.
The Nigerian Air Force, on its part, got N8.2bn to carry out aircraft maintenance, fuelling and construction of airfield facilities, among others.
It also got a capital vote of N239bn to buy additional aircraft, arms, rehabilitation of barracks, special vehicles and others.
The Defence Space Administration got a capital vote of N43.3bn to provide satellite imaging, cyber security, tracking equipment, drones, infrastructure and vehicles.
The Nigeria Security and Civil Defence Corps got a capital vote of N14.8bn to purchase vehicles, communication equipment, arms and ammunition, among others.
The Office of the National Security Adviser got N17bn to complete its counter terrorism centre.
Top Stories