Even with the NIN-SIM linkage, bandits and kidnappers have continued to operate undetected. 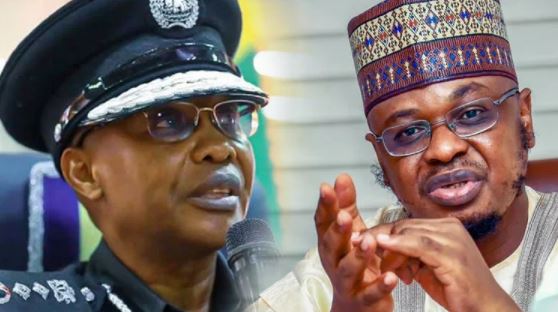 IGP and Isa Pantami
Kidnappers and bandits have made a mess of the federal government's directives on registration of telephone subscribers and the linkage of SIM with the National Identification Number.
This is as the police are not able to track and arrest the bandits even with victims giving them telephone numbers of dreaded bandits.
According to Punch, kidnap victims on Monday explained how bandits had been thwarting the Federal Government’s security regulations in the telecommunications sector.
Residents of Katsina, Zamfara and Kaduna states, who recounted their experiences in kidnappers’ dens, told Punch that they made the bandits’ telephone numbers available to security agents.
They, however, lamented that nothing was done to apprehend the hoodlums, thus making a mess of the Federal Government’s directives on registration of telephone subscribers and the linkage of SIM with the National Identification Number.
Under sections 19 and 20 of the Nigerian Communications Commission (Registration of Telephone Subscribers) Regulations, 2011, telecommunications firms are expected to register all subscribers.
In 2015, the NCC directed all telecommunications firms to deactivate unregistered or partly registered SIMs.
The regulation, according to government, is aimed at ensuring that all subscribers are traceable for security reasons.
To further strengthen security in the country, the NCC last year directed the linkage of SIMs with the NIN.
But victims, who spoke to The PUNCH, said with the way bandits were operating, the two regulations were of no use.
In Zamfara State, a kidnap victim, Mallam Yusha,u Jangeme, said security agents in his village, Jangeme, did nothing to trace the telephone calls of the bandits who kidnapped him.
Jangeme said bandits a few months ago kidnapped seven people in his village and he was contacted to bring ransom before they could be freed.
According to him, when he got to the forest to give kidnappers N1.4m out of N3m they demanded, they detained him, saying he must bring the remaining N1.6m.
He stated, “As soon as I got there, they received the money and refused to allow me to return home, saying that the remaining balance of N1.6m must be paid otherwise, they would not release me and the other seven people.”
The victim stressed that the security agents didn’t render any assistance in tracing the telephone calls of the bandits despite the fact that operatives in his village (Jangeme) were aware of the situation.
He stated, “The security agents posted to my village (Jangeme) knew what was happening, but they didn’t make any attempt to use the telephone number sent by the bandits who kidnapped us.”
Another person, Alhaji Sani Gyare, whose seven children were kidnapped some months ago, said “My seven children were kidnapped by bandits without resistance from the security agents who were alerted on what was happening in Kadauri village.
“When the bandits entered our village, we quickly informed the police but they didn’t report to the scene until after three hours when the bandits had left.”
He added that when the bandits called him and demanded N50m, he gave their phone number to the security agents, but nothing was done.
“The bandits called me and asked me to pay N50m so that they could release my children and I told them that I didn’t have such a huge amount”.
“I gave their phone number to the police so that they could trace the abductors but unfortunately, nothing happened”.
Another victim, Aminu Sarki told The PUNCH that he spent 23 days in bandits’ den, adding that he did not get any assistance from the security agents who were aware of his abduction.
He stated, “There was no any effort by the security agents to rescue me throughout the 23 days I stayed in bandits den.”
He however explained that he was lucky to have escaped when the bandits were asleep.
In Katsina State, a victim, who spoke on condition of anonymity, said when he was kidnapped, the bandits seized his younger brother’s phone.
According to him, it was the telephone they used in contacting his wife and negotiating a ransom of N7m.
He said the police were informed, but they did nothing.
SIM registration not helpful in preventing ban.
Top Stories