President Muhammadu Buhari has been accused of planning to rig the 2023 presidential election. 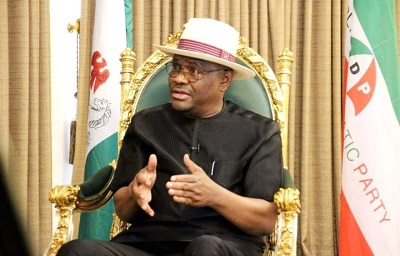 Governor Nyesom Wike
Rivers state Governor, Nyesom Wike has revealed that President Muhammadu Buhari is planning to rig the 2023 presidential election for this party the All Progressives Congress.
According to Wike, Buhari is doing this by nominating presidential aide, Lauretta Onochie as a National Commissioner in the Independent National Electoral Commission, INEC.
The Governor, who made the accusation in Port Harcourt during the presentation of his scorecard as Governor for six years, said despite the protest by Nigerians against the nomination of Onochie, the National Assembly appears determined to confirm her nomination.
He said the move is a plot of the grand design of the APC to rig the 2023 elections.
Governor Wike therefore called on President Muhammadu Buhari to immediately withdraw the nomination of Onochie as INEC commissioner to avoid creating more credibility problems for the commission.
In his words “Despite the flood of protests against her nominations and the general lack of trust in her capacity to remain impartial, it seems the APC-led senate is determined to confirm her appointment as part of their grand plot to rig the 2023 general elections well ahead of time, knowing that Nigerians will overwhelmingly reject them in a free fair and transparent contest”.
Top Stories