The President, spoke on Tuesday at a dinner with members of the National Assembly, held at the State House Conference Centre, Abuja, according to a statement by his media aide, Femi Adesina. 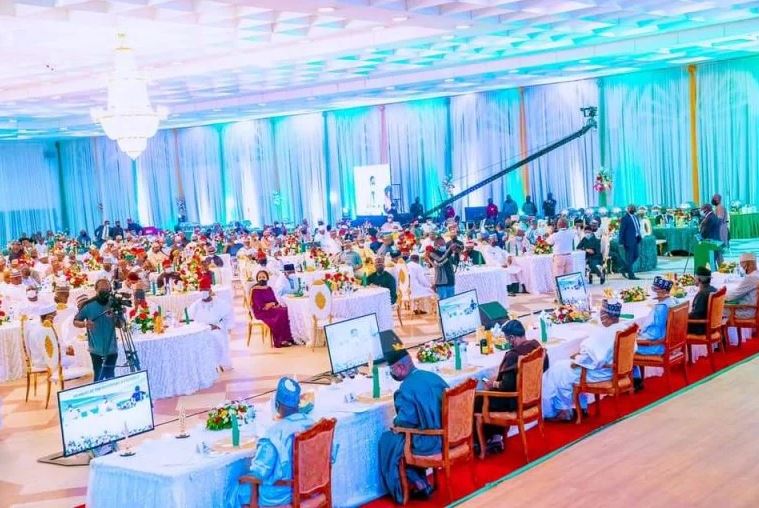 According to The PUNCH, Nigeria's number one man, President Muhammadu Buhari, has told members of the National Assembly that his regime is ready to use everything within its powers to end insecurity in the country and bring perpetrators of criminal activities to book.

The President, spoke on Tuesday at a dinner with members of the National Assembly, held at the State House Conference Centre, Abuja, according to a statement by his media aide, Femi Adesina.

The president was quoted as saying, “insecurity, manifesting as insurgencies, banditry, kidnapping and urban crime of all sorts is the single most difficult challenge we face today.”

He expressed concern that insecurity had inhibited government’s ability to build infrastructure, provide the much needed social services to the people, and to attract investments that drive innovation, create industries, and provide jobs and create wealth.

‘‘Some of the people who perpetuate these various manifestations of insecurity do so for profit, others, in the name of discredited ideologies.

‘‘Whatever their motivations may be, their actions are an existential threat to our country.

‘‘In the circumstances, we must do everything within our power, without consideration of distractions, to put an end to their activities and bring them to book.

‘‘We cannot allow ourselves to be distracted from this objective, or waver in our commitment, and I am confident that together we will triumph in our present efforts,’’ he said.

Buhari also used the occasion to hail the ninth National Assembly for discharging their legislative duties with maturity and competence, describing the legislature as ‘‘full partners in national development.’’

He particularly commended the minority parties in the legislature for their cooperation and support for Government programmes.

‘‘Our ability to govern in the best interests of the Nigerian people depends to a great deal on effective collaboration and partnership between the Legislature and the Executive.

‘‘The obligation to check and balance each other is not an invitation to conflict, and it should not be characterised by quarrelsome disagreement when consultation, engagements and compromise have proven time and again to be a more effective approach.

‘‘In the ninth Assembly, you have distinguished yourselves by your conduct in office, by the scale and quality of your legislative interventions, and by your capacity for engaging with the difficult questions facing the country with maturity and competence,’’ he said.

The President listed some legislative accomplishments of the ninth assembly ranging from returning of our budget cycle to January to December, the amendment of the Companies and Allied Matters Act (CAMA), the Nigeria Police Act, the Finance Act, the Deep Offshore Production Sharing Contract Act, amongst others.

Commending the leadership of the National Assembly under Senate President Ahmad Lawan and Speaker of the House of Representatives Femi Gbajabiamila for their dedication through challenging times, the President told the legislators, ‘‘You have also succeeded in overcoming the political and other obstacles that have, for two decades, inhibited the much-needed reforms of our Oil and Gas industry, resulting now in the passage of the Petroleum Industry Bill.

‘‘I congratulate you all, and thank you for your contributions to the difficult, yet necessary task of nation building.’’

The President noted that the executive and legislature came into office at a time of significant challenges for the country.

‘‘Overcoming these challenges require that we finally confront long ignored questions of economics, politics, law and history that are often at the root of our national problems.

‘‘This moment in history requires us to make hard choices, take difficult decisions and act with diligence and patriotism to ensure that our country can survive and thrive long after we have all left.

‘‘What this means in effect is that our jobs will not get any easier. However, the objectives we seek, and will work together to achieve, deserve our best efforts regardless the sacrifice,’’ he said.

As the second legislative year of the 9th Assembly has just come to an end, the President noted that it was appropriate to jointly review shared commitments, to identify what has been achieved, and what is still left undone.

‘‘This way, we can prioritise activities and allocate the resources necessary to ensure that in the lifetime of this Assembly, and of the administration, we can complete the work we have started, and leave behind a record of achievement that will stand all of us in good stead in the assessment of history,’’ he said.

The President said he looked forward to continued collaboration and partnership between the Executive and Legislative arms of government, working together to achieve a shared vision of a peaceful and prosperous country.