Oh No! Man Killed While Trying To Rescue Pharmacist From Kidnappers In Kogi


The abduction of the pharmacist resulted in a gun duel between youths of the community and the gunmen, leading to the death of Anda and injuries to two others before the kidnappers escaped with their victim. 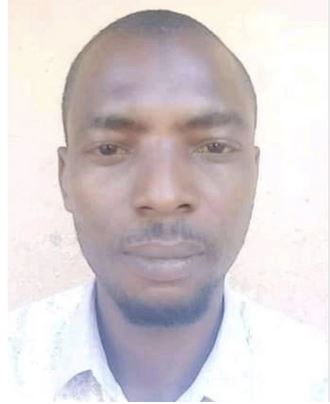 A young man identified as Habeeb Anda has lost his life while two others have been injured during an attempt to rescue a pharmacist from kidnappers in Okene, Kogi State.

It was gathered that Abdulazeez Obajimoh, the Managing Director of AZECO Pharmaceutical Company at Ozuwaya  in Okene, was abducted by gunmen on Sunday afternoon, July 11.

The abduction of the pharmacist resulted in a gun duel between youths of the community and the gunmen, leading to the death of Anda and injuries to two others before the kidnappers escaped with their victim.

One Hon. Ayihi Abdulmumin, who confirmed the incident shared a photo of the deceased on Facebook.

"A brother lost his life today during his struggling to rescued pharmacist Alh. Abdulazeez aka AZICO from the hand of kidnappers in his store behind late Aday Alh Dongo residence Lafia street Okene L.G.A,"

"The incident occurred this afternoon while the township youth who has their father's land in heart, tried to rescued the man but all effort made are in vein, due to un availability of security agents in time. May Allah have mercy on your soul, forgiven your shortcomings and grant you Aljanatu Firdausi. Ameeeeen."

Meanwhile, members of the Pharmaceutical Society of Nigeria (PSN), Kogi State Chapter, has called on relevant security agencies to as a matter of urgency map out strategies to curb the incessant attacks on their members, pharmacies and other drug stores across Kogi state.

The state chairman of PSN, Dr Lawal Muhammed made the call in a press statement issued on Thursday, July 15. "Practitioners and businessmen in Pharmaceuticals have become soft targets for the kidnappers and armed robbers. Within the space of one week, we have recorded three cases of kidnapping in broad daylight and two people have lost their lives during these very ugly incidents in Okene, Kabba, and Ajaokuta. We have also had instances of armed robbery attacks on Pharmacies this year and the previous year within Lokoja, the state capital," the statement reads.

"We, therefore, appeal to relevant security agencies in Kogi state and other stakeholders to swing into action for the release of the victims hale hearty, to Map out strategies to prevent future occurrence.

"Most of the monies invested in pharmaceuticals are loans from banks. We therefore urge the perpetrators and the general public not to see us as being rich. One of the implications of this heinous act is shortages in drug supply and withdrawal of services.

"We all need drugs irrespective of our class, either to keep fit or to recover from an illness. It is an abomination to attack Health facilities/personnel even during the war, so all hands must be on deck to put an end to this menace.

"We call on our father, the Executive Governor of Kogi State, to come to our aid. You have always shown your capacity in the fight against insecurity, we have undiluted confidence in your ability to secure lives and property. Your excellency sir, you have done it before, you will do it again.” 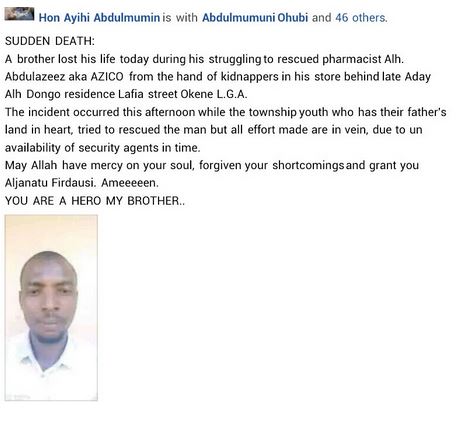