How Officer in Charge of the Suleja Prisons Allegedly Seduced Inmate’s Wife, Impregnated and Married Her


Controller General of the Nigerian Correctional Service NCoS, Haliru Nababa has wielded into the case. 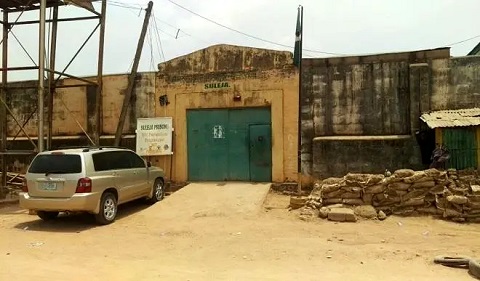 Suleja prisons
Details have emerged how the Officer in Charge of Suleja Custodial Centre, AbdulRahman Musa, an Assistant Controller of Corrections seduced the wife of an inmate, impregnated and married her.
According to Vanguard, the Controller General of the Nigerian Correctional Service NCoS, Haliru Nababa has initiated a high-level disciplinary procedure into the illicit marriage contract.
The inmate (names withheld) is currently awaiting trial at the facility on charges of armed robbery and possession of illegal firearms.
While his wife had been visiting him regularly, she was said to have recently complained to relatives that she could no longer bear the agony of having her husband behind bars indefinitely and that she would be willing to file for a divorce.
The troubled inmate had consequently approached the officer in charge, ACC Musa to help talk to the wife and make her see reason while she should keep faith with him, the husband.
Vanguard gathered from top officials at the NCoS Headquarters that ACC Musa had taken advantage of the situation to lure the emotionally-deprived wife to his bed.
“Having gotten her pregnant, he then proceeded to tie the knots with her without even his own Personal Assistant knowing. He did everything in secret to the point that not a single personnel knew about it”, said the source.
N10,000 bride price
Consequently, ACC Musa on resumption from his wedding had approached the inmate and given him N10, 000 while advising him to forget his wife, saying “she is a useless woman”.
When the troubled husband returned to the “yard”, he was said to have narrated his plight to his fellow inmates who became infuriated and starting singing protest songs.
While ACC Musa made to calm the situation down, the angry inmates were reported to have bathed him with faeces and urine.
Multiple Vanguard sources disclosed that the randy officer has now been redeployed to Kano state with immediate effect.
FCT Command reacts
Meanwhile, the Federal Capital Territory FCT Command of the NCoS said it has begun an investigation into allegations of an intimate relationship between ACC Musa and the wife of an inmate under custody at Suleja Custodial Centre.
Command Controller of Corrections, Dr AbdulRahman Maiyaki, disclosed this in a statement signed by the Command’s spokesperson, Chukwuedo Humphrey.
Part of the statement reads; “Controller Maiyaki upon getting the report has further informed the Controller General of Nigerian Correctional Service, Haliru Nababa mni, and acting upon the directives of the Controller General, has instituted a full-blown investigation into the matter and also for unhindered access to investigation and justice, Mr Musa has been deployed out of Suleja Custodial centre.
“The Controller wishes to assure all parties involved that upon the report of the investigation, justice will be served as the service does not hide any staff who paints the behaviour and good morals of the service in a bad light.
“He further encouraged members of the public to continue to have faith in the officers and men of the command as they are doing their best in ensuring that the inmates under their custody are effectively reformed and upon discharge, become better citizens in the society.”
Top Stories