The tech giants will provide names, emails and IP addresses of users who are believed to have sent discriminatory messages if requested by the authorities. 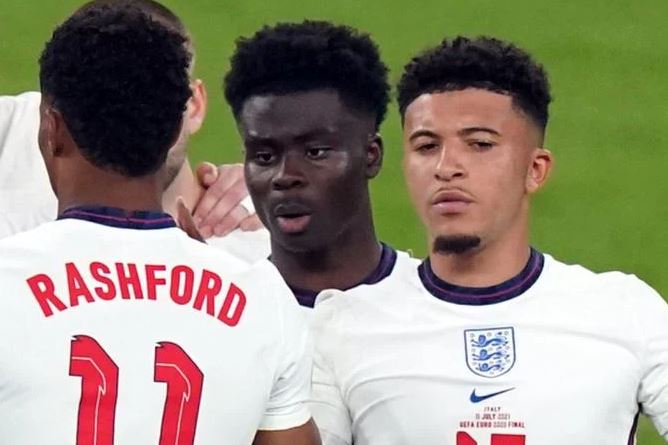 Personal details of those who posted racist messages and comments online after England's Euro 2020 final penalty shootout have been handed over to the authorities by social media companies.

According to reports, Twitter and Facebook have been 'working very closely' with investigating police officers, to look into dozens of people's racist tweets after five people were arrested in the wake of Sunday's final.

The tech giants will provide names, emails and IP addresses of users who are believed to have sent discriminatory messages if requested by the authorities, the Times reports.

On Thursday, the UK Football Policing Unit (UKFPU)  provided an update on its investigation following abusive posts targeting Marcus Rashford, Jadon Sancho, and Bukayo Saka in the wake of the Three Lions' defeat on penalties to Italy.

Twitter has since removed more than 1,000 posts in the 24 hours during and after the match and suspended a number of accounts for violating its rules. Facebook also confirmed that abusive comments on its platform and Instagram have been removed.

The company said abuse from 10,000 accounts was aimed directly at players, through Twitter and Instagram, and includes comments about race, ethnicity, religion, sexual orientation, as well as extreme personal abuse and threats of harm, including to family members.

Adam Mosseri, Instagram's chief executive, told the Times that mistakes in the company's detection software had allowed abusive posts to slip through, but that these had now been fixed.

He explained: 'It is absolutely not OK to send racist emojis, or any kind of hate speech, on Instagram'.

A UKFPU statement read: 'Following England's defeat against Italy on Sunday a torrent of racist comments aimed at some of the team's black players appeared on platforms including Facebook, Instagram and Twitter.

'A hate crime investigation is under way by the UKFPU, with a dedicated team of investigators working their way through a large number of reports from across the country.

'So far, dozens of data applications have been submitted to social media companies and four people have been arrested by local police forces.'

Chief Constable Mark Roberts, the National Police Chiefs' Council football policing lead, said: 'The racial abuse aimed at our own players following Sunday night's game is utterly vile and has quite rightly shocked and appalled people across the country.

'Our England team have been true role models during the tournament, conducting themselves with professionalism and dignity.

'I'm disgusted there are individuals out there who think it's acceptable to direct such abhorrent abuse at them, or at anybody else.

'The UKFPU investigation is well under way and work continues to identify those responsible. We are working very closely with social media platforms, who are providing data we need to progress enquiries.

'If we identify that you are behind this crime, we will track you down and you will face the serious consequences of your shameful actions.'