The aircraft an AlfaJet was said to have left Yola the Adamawa state capital for anti banditry operations when it crashed in one of the villages. 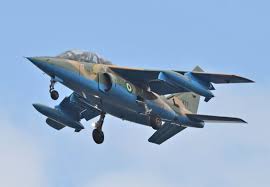 The aircraft an AlfaJet was said to have left Yola the Adamawa state capital for anti banditry operations when it crashed in one of the villages.

There has been no news of the situation of the crew on board the aircraft at the time of filing this report.

A top NAF officer who does not want to be mentioned in print, told Daily Sun that the NAF base at Yola is already in a mourning mood as the news of the crash filtered in.

Although the NAF is yet to confirm the crash, the source said “I can tell you authoritatively that a NAF Alfa Jet has crashed in Kaduna. The Jet left Yola for anti banditry operations in Kaduna.

“As we speak, we don’t know the state of the crew on board but a search team has left for the crash site. The Air Force base around Yola is now in a mourning mood as this crash is becoming too much for the NAF, the authorities need to do something even if it means going spiritual because this is not ordinary”.

The source who was visibly shaken by the crash less than one month after the one that killed the former chief of army staff and ten other in Kaduna.

When contacted the director public relations and information Air Comodore Edward Gabkwet promised to get back back never did at the time of filing this report.

Recall that in May, an air mishap claimed the lives of serving Army Chief, Lt. Gen. Ibrahim Attahiru and other officers.