Igboho, who was arrested at Cadjèhoun Airport in Cotonou on Monday night, is being tried for immigration-related offences. 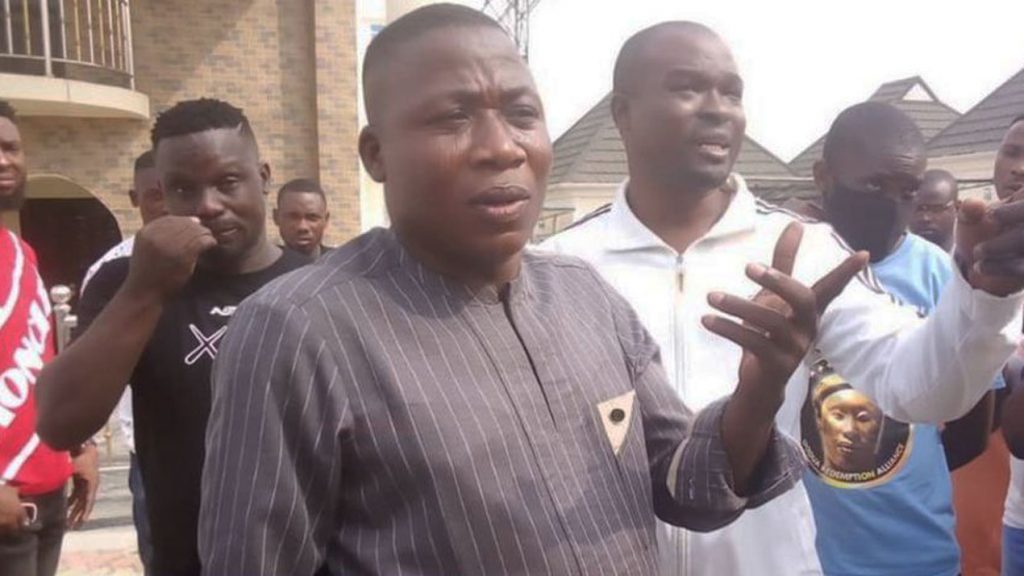 According to a report by The PUNCH, the hearing of a case against the Yoruba Nation activist,  Sunday Adeyemo, also known as Sunday Igboho, lasted for more than six hours on Thursday at  Cour De’appal De Cotonou, Benin Republic.

Igboho, who was arrested at Cadjèhoun Airport in Cotonou on Monday night, is being tried for immigration-related offences.

After three sessions, the court ordered the release of Igboho’s wife, Ropo, while the activist was returned to cell.

The sessions started at 10am and ended at about 8pm, but there were intermittent breaks during the hearing.

The hearing was adjourned till Friday, but it was gathered that the court might not sit today (Friday).

A member of Igboho’s legal team, Pelumi Olajengbesi, confirmed the development to The PUNCH on Thursday, adding that the team was hopeful that the court would grant bail to Igboho

Earlier, there was anxiety among supporters of the Yoruba Nation activist when he arrived at the court on Thursday.

A source said Igboho, who was arrested around 8pm on Monday by the International Criminal Police Organisation was arraigned for immigration-related offences.

The activist and his wife, were arrested at the airport when they wanted to catch a flight to Germany.

Recall that the Department of State Services raided Igboho’s residence in the Soka area of Ibadan at 1am on  July 1, 2021, arrested at least 12 of his associates and killed two others during the bloody raid.

The DSS spokesman, Peter Afunanya, later that day paraded the associates of the activist, displayed some passports including that of Igboho, AK-47 rifles, rounds of ammunition, African bulletproof vests, amongst others as exhibits.

The PUNCH had on Wednesday reported that Igboho’s predicament started when he issued and enforced a seven-day ultimatum on ‘killer herders’ in the Ibarapa area of Oyo State.

According to the report,   Nigeria’s Ambassador to the Benin Republic, and the immediate past Chief of Army Staff, Lt. Gen. Tukur Buratai (retd.), was pushing for the extradition of Igboho to the DSS headquarters in Abuja but Igboho’s lawyer, Yomi Aliyyu (SAN), insisted that his client could not be extradited because the 1984 Extradition Treaty between Nigeria, Benin and two others excluded political refugees like Igboho.

The PUNCH had reported that the Federal Government planned to extradite the activist on Wednesday but Benin Republic insisted that it would not be part of any process that was against due process.

Igboho and his wife have since been kept in police custody in Cotonou while his lawyers are in talks with the Beninise government to secure his release and stop his extradition.

On Thursday, many Yoruba-speaking supporters of the Igboho in the French-speaking country were seen at the court premises in solidarity with the 49-year-old activist.

The supporters were dressed in t-shirts which had inscriptions such as ‘Yoruba Nation now’, ‘Oduduwa Nation now’, amongst others emblazoned on them.