The man received the worst birthday surprise ever as all six ladies he’s dating on campus converged at his residence. 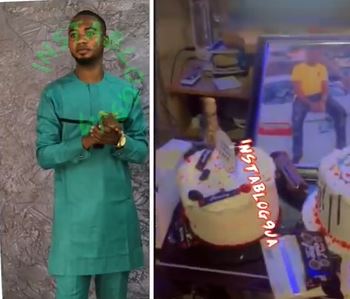 Alade was given the shock of his life by the six women
A love story has gone sour after six ladies confronted a 400 level Electrical Engineering student of Ekiti State University, Ekiti, Alade Emmanuel for decieving them with love.
The man received the worst birthday surprise ever as all six ladies he’s dating on campus converged at his residence.
It was gathered that the incident happened on Tuesday, July 27. “I am a victim. I gave him a birthday gift and posted on my WhatsApp status. That’s how one girl messaged me to say I’m snatching her man. Although, I’ve been suspecting him of cheating.
So I planned with the other girl to pay him a surprise visit and it was there we discovered there were four other girls he was dating. We entered and he was shocked. This is the same guy we give money, campaign for him because he’s contesting for SUG president, take care of his physical and sexual needs. As much as we didn’t get back all the money we’ve spent on him, we taught him a special lesson and ate out of the birthday cakes he was given,” a source said.