It is the end of the road for a notorious gunrunner, Geoffrey Ayuba after he was arrested in Kaduna. 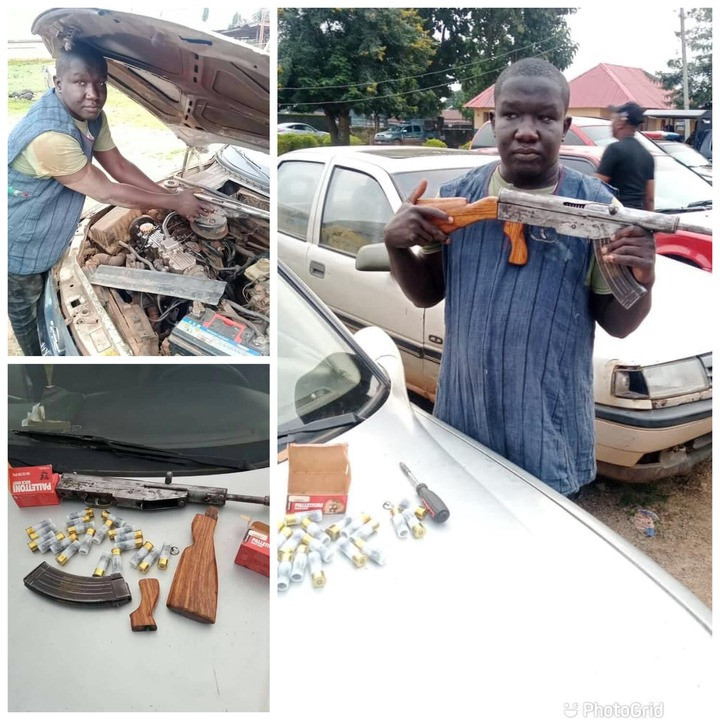 Geoffrey
Geoffrey Ayuba, a notorious gunrunner has been apprehended in Kaduna state by the Kaduna State Police Command.
The police also recovered weapons Ayuba of Anguwan Rimi Kafanchan in the Jema'a Local Government Area of the state.
Dressed in a Fulani attire, the suspect was nabbed with one AK-47 rifle and two packs of pump-action cartridges which were hidden in the bonnet of his Opel Vectra car (with registration number KAF 733 MK).
Confirming the arrest in a statement, the Police Public Relations Officer (PPRO), ASP Muhammed Jalige, said: “The Operatives of the Kaduna Police Command attached to Kafanchan Divisional Headquarters on July 28, 2021, at about 1600hrs while acting on reliable information from a good samaritan, intercepted an Opel Vectra vehicle with registration number KAF 733 MK driven by one Geoffrey Ayuba ‘m’ of Unguwan Rimi Kafanchan in Jema’a LGA of Kaduna State.”
The statement further said that when a careful search of the said suspicious vehicle was conducted, an AK47 rifle and two packets of 12-gauge shotgun shells that were criminally concealed in the engine compartment of the car were recovered.
“Investigations are ongoing as the suspect has provided useful information to the Police that will facilitate further breakthroughs,” the statement said.
Top Stories