The helicopter it was gathered plummeted from the sky and crashed into a field. 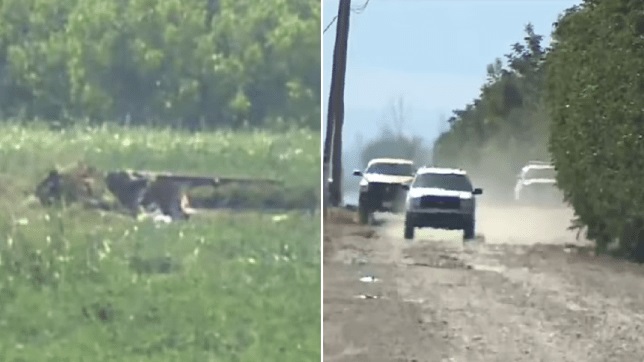 Scene of the crash
A horrific helicopter crash has left four people on board dead.
The helicopter it was gathered plummeted from the sky and crashed into a field.
There were no survivors of the crash and the incident which happened on Sunday in a remote area of Northern California, US left many people in shock.
According to the Colusa County Sheriff’s Department, the Robinson R66 chopper crashed at 1:15pm about 65 mile northwest of Sacramento.
The Federal Aviation Administration has said it is investigating the cause of the tragedy, a spokesperson said in a statement.
It was first reported by a Cal Fire engine that was driving through the area, FOX 40 reports.
Deputies and Sacramento River Fire officers are said to have found the four passengers still inside the helicopter after it crashed. They were all declared dead at the scene and have yet be be formally named, according to KCRA.
Walt Seaver, who owns the tomato farm where the helicopter crashed, said he didn’t see any smoke as the helicopter came down.
The cause of the crash is currently unknown, and the FAA and the National Transportation Safety Board will work together to find out exactly what happened in the lead up to the crash.
Top Stories