Sidika in a Question and Answer session she had with her fans, revealed that she only altered her breasts size, teeth and skin complexion. 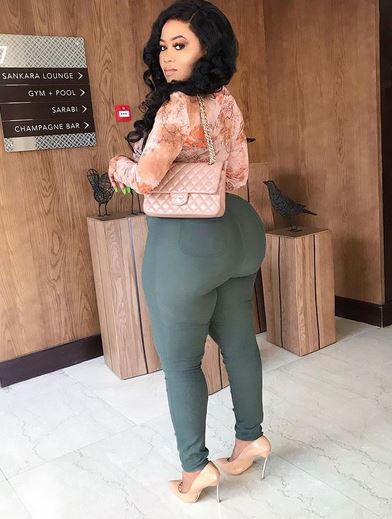 Popular Kenyan socialite, Vera Sidika has opened up on having breast surgery.

Sidika in a Question and Answer session she had with her fans, revealed that she only altered her breasts size, teeth and skin complexion. The socialite added that she will be going for a small butt after giving birth.

“My booty is natural. But my boobs, teeth and skin complexion are fake. In fact, hopefully after delivery, I’d want a smaller booty. Honestly, it’s too big. I don’t like it." 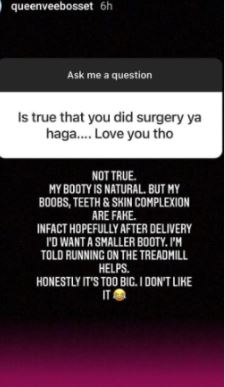 Making a clarification on how she will be feeding her child with a breast implant, Sidika disclosed that the implant was placed in an empty pocket space which does not interface with the breast tissues.

“Doesn’t affect nothing. During breast augmentation, it’s normally placed in an empty pockets space and it doesn’t evet affect or come in contact with breast tissues."

She also revealed that she is now legally married to musician Frederick Mtinda, alias Brown Mauzo.

“Wedding ceremony. If you’re talking about that which involves me in a white wedding gown and bae in a tuxedo, we haven’t done that yet. Legally married? Yes, we are. When ready we’ll do a wedding ceremony with decor, food, cake all of that. No rush." 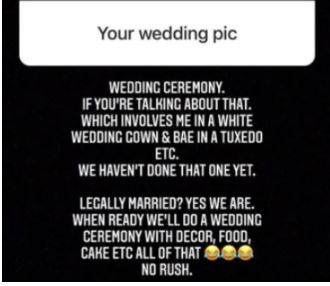 On her relationship with her ex-boyfriend Otile Brown, she wrote;

“We are not friends.”