He paid a surprise visit to Warri, the place he hustled before becoming a music star. 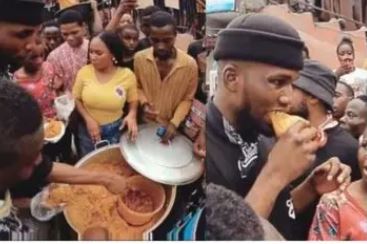 Popular Nigerian singer, Victor AD turned 28 on Monday, August 2 and visited his former neighbourhood in Warri, Delta state to celebrate with his fans.

He paid a surprise visit to Warri, the place he hustled before becoming a music star.

In a video he shared online, Victor stormed the streets to appreciate fans who supported him when he was nobody. He also shared free food with the public.

The singer went into the company of Warri-based top rapper, Erigga. A large crowd turned up to show him, love, as he related with his humble beginnings.

In a part of the video, he could be seen addressing the crowd and thanking them for their support, saying they made it possible for him to travel around the world.

The singer interacted with the fans and even had a local meal eaten out of nylon.

Watch a video of the tour below;