It was gathered that security operatives allegedly demand N15, 000 bribe from truck drivers along the Yola-Mubi Road. 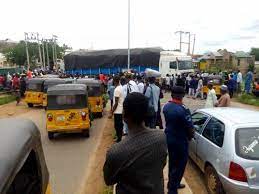 According to a report by SaharaReporters, the Yola bridge in Adamawa State linking the state capital with the northern parts of the state has been totally blocked by a heavy-duty truck to protest against the demand of N15,000 bribe by security operatives.

It was gathered that security operatives allegedly demand N15, 000 bribe from truck drivers along the Yola-Mubi Road.

An eyewitness told SaharaReporters that as usual, security officials allegedly demanded a bribe of N15,000 from the truck driver on Thursday but he was only able to raise N9,000.

The officials, therefore, allegedly seized the truck driver's mobile phone because of the balance of N6, 000 he could not afford.

As at the time of filing this report, the police and army officers, along with officials of the Nigeria Security and Civil Defence Corps (NSCDC) were negotiating with the truck driver to get the matter resolved.