In a video that surfaced on Monday, the IPOB members destroyed the goods of the people who were selling in residential and industrial areas. 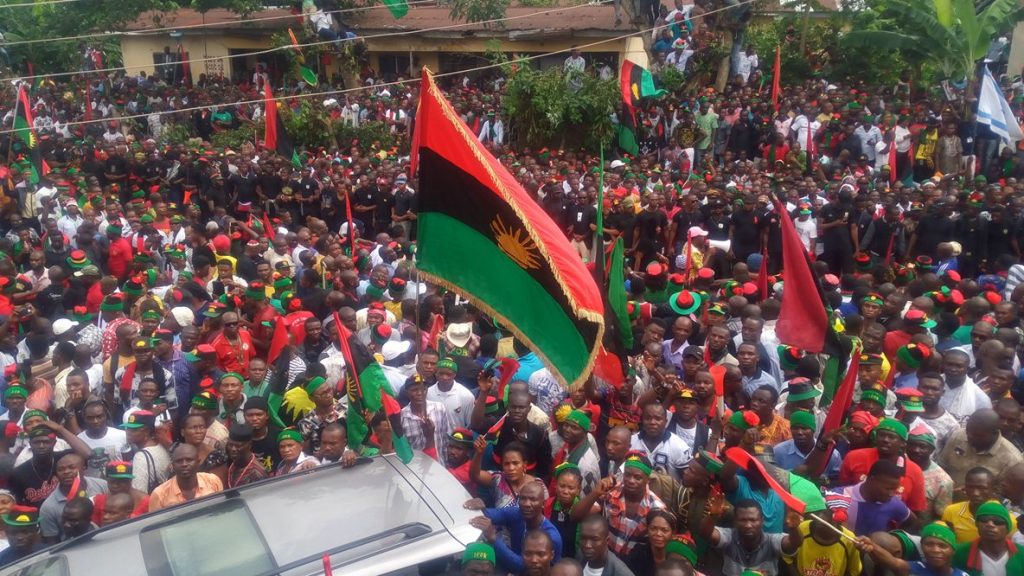 IPOB
Men suspected to be members of the Indigenous People of Biafra enforcing the sit-at-home order, yesterday stormed shops and outlets of those who went against the order in the South-East states.
In a video obtained by SaharaReporters on Monday, the IPOB members destroyed the goods of the people who were selling in residential and industrial areas.
IPOB had issued an order that there would be a sit-at-home protest to halt the commercial and social activities in demanding the unconditional release of its leader, Nnamdi Kanu who has been in the custody of the Department of State Services.
While there was a full compliance with the order in Enugu and Abia, Anambra and Imo defied the order as the state governments threatened the civil servants.
Some people also lost their lives due to clashes between the IPOB directive’s enforcers and the residents going about their businesses.
Two residents from Owerri, the Imo State capital spoke to SaharaReporters that commercial activities took place.
Chibundu Ochegbu said, “There’s partial compliance. The civil servants went to work because the government enforced them to come to work. There are vehicular movements. Military personnel and policemen are parading. So, I can tell you there is movement in Owerri.”
“No one is sitting at home. People are going about their activities,” another source who lives in Umuguma in the outskirts of Owerri who spoke on condition of anonymity said.
Kanu was arrested in Kenya in June and extradited to Nigeria to abruptly appear before Justice Binta Nyako of the Federal High Court over allegations bordering on treason, terrorism, among others levelled against him by the Nigerian government.
He was to appear before the court on July 26, to continue his trial but the operatives of the DSS failed to bring the IPOB leader, which compelled Nyako to adjourn the case till October 21.
Top Stories