Omokri said he is even sure the words written on the placards didn't come from the so-called repentant terrorists. 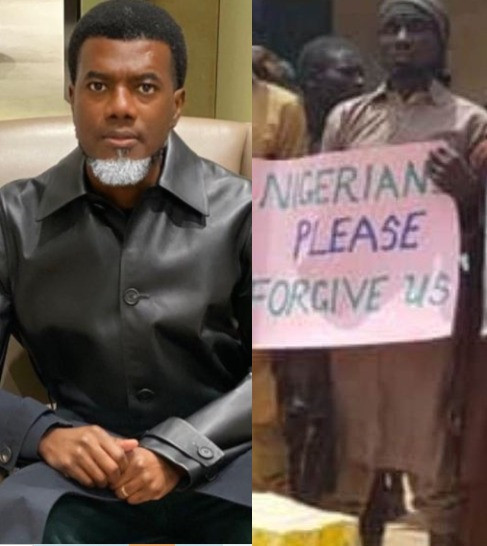 Omokri blasts army for sharing photos of Boko Haram terrorists begging for forgiveness
Reno Omokri has lashed out at the Nigerian army after surrendered Boko Haram members were seen asking Nigerians for forgiveness.
Omokri said he is even sure the words written on the placards didn't come from the so-called repentant terrorists.
The Nigerian Army on Monday, August 9, released photos of the surrendered sect members carrying placards with inscriptions ''Nigerians Please Forgive Us''
Reacting to the photos via his Instagram page, Reno wrote;
''The Buhari administration shared photos of so called repentant Boko Haram terrorists and asked Nigerians to forgive them. Does it make sense to ask Nigerians to forgive people who have killed innocent Nigerians when the Buhari government wants to prosecute Sunday Igboho for protecting the same innocent Nigerians?
Why should we forgive killers and prosecute defenders? Is it because these killers are Northern Muslims like Buhari and Igboho is not? I am not understanding! How many people has Buhari himself forgiven? Has he forgiven Dasuki? Buhari that killed innocent peaceful #EndSARS protesters at #LekkiMassacre?
They even bought provisions and drinks for them. Imagine! In fact, I doubt that that sign was written by these mostly illiterate Boko Haramists. Forgive who? Tufiakwa!''
Top Stories