The 38-year-old who posted a video on his Youtube channel where he showed clips of Suleman declaring to his congregation that angels would deposit money into their bank accounts, was interrogated for about four hours and later detained after being given stringent bail conditions. 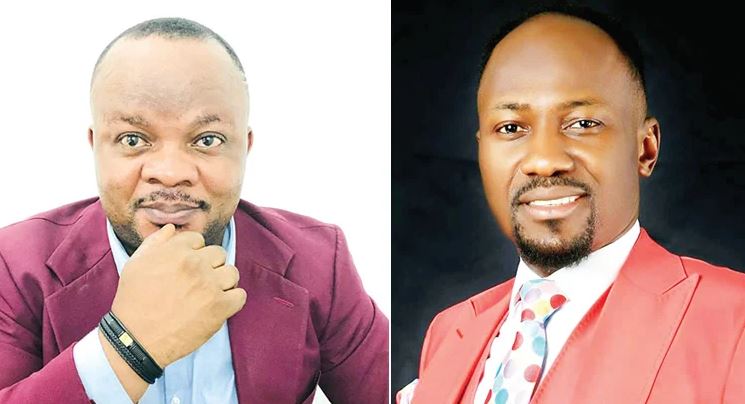 A Youtuber identified as Israel Balogun has reportedly been detained by the Police Force Criminal Investigation and Intelligence Department in Abuja days over allegations of criminal defamation and cyber stalking of Apostle Johnson Suleman, the General Overseer of the Omega Fire Ministries International.

Punch reported that the 38-year-old who posted a video on his Youtube channel where he showed clips of Suleman declaring to his congregation that angels would deposit money into their bank accounts,  was interrogated for about four hours and later detained after being given stringent bail conditions.

It was gathered that the clips were from ministrations of the cleric in Atlanta, United States, and Auchi, Edo State, where worshippers showed their phones to testify to receiving credit alerts in their bank accounts.

Balogun received mixed reactions after he described the claims as false and slammed Suleiman.

He further told the publication that he later got a threat call from one Obi-West over the video and a letter from Suleman’s lawyer on Monday, August 2, 2021, demanding a public apology within seven days.

“He said he is the eyes of Apostle Suleman on social media and said I should expect to hear from them. He said I will be missing and he will make sure I get punished by officers from the Nigeria Police Force Headquarters.

“He said killing me is nothing to them. I recorded the whole conversation and used it in recording another video where I called people to rescue me because my life was in danger.

“I was still consulting with my lawyer when somebody called to notify me that some guys from Abuja were in Lagos to pick me up to Abuja. My wife, daughter and I immediately abandoned our home and went into hiding.”

The YouTuber also claimed that he later received an invitation from the Special Enquiry Bureau, FCIID, Abuja, signed by one ACP Yahaya Abubakar, asking him to report at the FCIID on Wednesday, August 11, 2021.

His lawyer, Inibehe Effiong reportedly confirmed on Wednesday August 11 that he had been detained.

“The formal interrogation was for about four hours, including the time they used in taking his statements. Part of his bail conditions was to provide two sureties with landed property and certificate of ownership in Abuja, and a Level 14 civil servant with either a letter of last employment or letter of introduction.

“We have somebody with CofO, and presented a Level 13 civil servant, which they accepted. But they insisted that the person should bring a letter of introduction, whereas the person has a letter of last promotion. Even though we said we will bring the originals tomorrow, they rejected it and put Balogun in the cell.

“The conditions are difficult and unnecessary given the nature of the offence. There is no reason why the police should get involved as he (Suleman) should have gone to court to file legal action if he felt he had been defamed.”

A spokesperson for the FCIID, Abuja, Funmi Eguaoje however insisted that the bail conditions were normal. She said;

“If you bring a surety that is a civil servant, there should be verification from the office of the civil servant. There should be a letter of introduction from his boss to show that he is a staff member. They should bring it tomorrow (Thursday) and they will release him.”

Suleman’s counsel, Samuel Amune on his own part maintained that he only wrote Balogun to recant his statements and apologize for using derogatory remarks. He also stated that he doesn't know anything about the petition against Balogun.