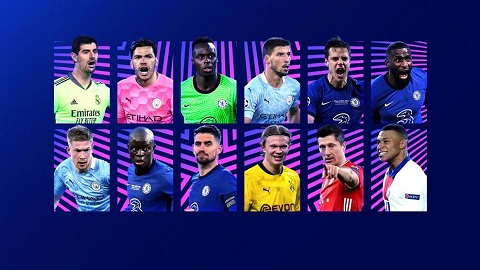 The shortilisted candidates
Players shortlisted for the 2020/21 UEFA Champions League awards have been released.
The award is organized to see players get honored in categories such as the best goalkeeper, defender, midfielder, and forward for the just concluded season.
The jury to pick the winners of the award comprises coaches of the 32 clubs that took part in the group stage of the 2020/22 UEFA Champions League, with 55 journalists from each of UEFA’s 55 member associations selected by the European Sports Media group. The coaches are not allowed to vote for their own players.
The Coaches and journalists will be required to select a shortlist of three players in each category by allocation respectively five points, three points, and one point to each of them.
They will base the final result on the total number of votes cast by the coaches and the journalists.
This is a rundown of the shortlisted players:
GOALKEEPERS:
Thibaut Courtois (Belgium- Real Madrid)
Ederson Santana (Brazil- Manchester City)
Edouard Mendy (Senegal – Chelsea FC)
DEFENDERS:
Cesar Azpilicueta (Spain – Chelsea FC)
Ruben Dias (Portugal – Manchester City)
Antonio Rudiger (Germany – Chelsea FC )
MIDFIELDERS:
Kevin De Bruyne (Belgium – Manchester City)
Jorginho (Italy – Chelsea FC)
N’golo Kante (France – Chelsea FC)
FORWARDS:
Erling Haaland (Norway – Borussia Dortmund)
Kylian Mbappe (France – Paris Saint-Germain)
Robert Lewandowski (Poland – Bayern Munich)
The award ceremony will take place on Thursday, August 26th, 2021, in Istanbul, Turkey. The draw of the 2021/22 UEFA Champions League season will also be conducted on the same day.
Top Stories