Chief Edwin Clark's PANDEF has slammed President Buhari for signing into law the PIB without resolving some controversial areas. 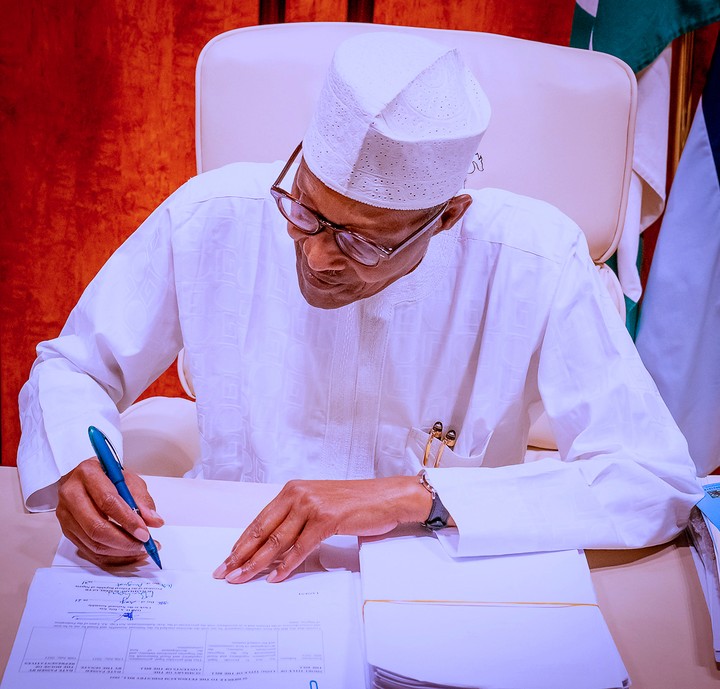 Buhari signs PIB into law
The Pan Niger Delta Forum has described as unfortunate the decision of President Muhammadu Buhari to sign the controversial Petroleum Industry Bill 2021 into law.
The group led by elder statesman, Chief Edwin Clark, said it is a very “sad and bad day” for Nigeria that despite the overwhelming outcry of the people of the South-South zone, the President still went ahead and signed the PIB into law.
PANDEF had insisted that the equity share must be 10 per cent for host communities and rejected the 3 per cent allocated for host communities in the just signed Petroleum Industry Act.
“It clearly shows the disregard for the feelings and concerns of the Niger Delta people by the Buhari administration,” PANDEF spokesman, Ken Robinson, said in a chat with The PUNCH on Monday.
He spoke minutes after presidential spokesman, Femi Adesina, said Buhari signed the controversial bill into law on Monday.
The PUNCH had earlier reported that in a statement titled, ‘President Buhari Signs Petroleum Industry Bill Into Law’, Adesina said, “Working from home in five days quarantine as required by the Presidential Steering Committee on COVID-19 after returning from London on Friday, August 13, the President assented to the Bill Monday, August 16, in his determination to fulfil his constitutional duty.
“The ceremonial part of the new legislation will be done on Wednesday, after the days of mandatory isolation would have been fulfilled.
“The Petroleum Industry Act provides legal, governance, regulatory and fiscal framework for the Nigerian petroleum industry, the development of host communities, and related matters.
“The Senate had passed the Bill on July 15, 2021, while the House of Representatives did same on July 16, thus ending a long wait since early 2000s, and notching another high for the Buhari administration.”
Reacting, PANDEF, in a phone interview with our correspondent on Monday, said the President had no feeling for the people of the Niger Delta who continue to suffer the environmental degradation which has been the consequences of oil exploration in the zone.
The group’s spokesman said, “It is very unfortunate that in spite of the outcry and the condemnation that greeted the paltry 3 per cent provided for the development of the host communities and the outrageous 30 per cent of the NNPC limited profit allocated for the exploration of oil in the frontiers.
“It is sad that Mr President has gone ahead to endorse the bill into law.
“It is a reality that this country does not care about the feelings and hopes and aspirations of the Niger Delta people while we continue to suffer the neglect and degradation and the decimation of our environment and our ecosystem.
“The livelihood of our children has been devasted and we suffer the consequences of this industry operating in our environment with an insensitive government that its agencies are not enforcing the faulty laws to protect the environment from the operations of the industry.
“It is very sad, it is a bad day for the Niger Delta people.”
Robinson said Niger Delta groups would meet in the coming days and come up with a decision.
Top Stories