The woman said she is waiting for the Taliban to come and kill her as the Islamic militants took over the government. 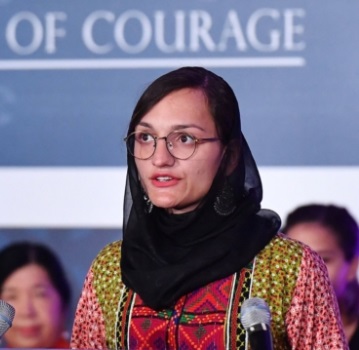 Ghafari
A female mayor in Afghanistan, Zarifa Ghafari has left her fate in the country to be decided by God after vowing not to abandon her family.
This comes as the Taliban took over the country.
The woman said she is waiting for the Taliban to come and kill her as the Islamic militants took over the government.
Zarifa Ghafari, the mayor of Maidan Shar, told British newspaper inews: "I'm sitting here waiting for them to come. There is no one to help me or my family. I'm just sitting with them and my husband. And they will come for people like me and kill me. I can't leave my family. And anyway, where would I go?"
Ghafari, 27, is Afghanistan's youngest mayor and the first woman to hold the office in Maidan Shar in Wardak province.
The Taliban has frequently vowed to kill the articulate, politically influential female critic. Her father General Abdul Wasi Ghafari was gunned down on 15 November last year, just 20 days after the third attempt on her life failed.
The British newspaper reported that only three weeks ago, Ghafari said there was hope for her country.
She had said before the Taliban overthrew the government: "Younger people are aware of what's happening. They have social media. They communicate. I think they will continue fighting for progress and our rights. I think there is a future for this country."
Ghafari was appointed in the summer of 2018 by President Ashraf Ghani, The New York Times reported. Although there have been female governors and mayors before in Afghanistan, she is one of the few women ever to have held a government job in the very conservative city of Maidan Shar.
As the Taliban became resurgent, Ghafari was given a job in the relative safety of the Defense Ministry in Kabul, with responsibility for the welfare of soldiers and civilians injured in terrorist attacks, inews reported.
Just before Kabul fell to the Taliban, senior members of the government, including the Afghanistan President, fled the country. But Ms Ghafari and people like her have nowhere to hide.
Just like Ghafari, the few females in the government in Afghanistan have said they fear for their lives.
Also, there have been concerns for the safety of Afghan female judges, especially those who had sentenced Taliban fighters in the past.
In a statement, the International Association of Women Judges warned that Afghan women judges and their families would be in particular danger due to the nature of their work and past rulings they have made in the criminal, anti-corruption and family courts. The association said the danger was exacerbated by their gender and the likelihood that offenders sentenced by them will be released from prison.
On Sunday, August 15, shortly after overthrowing the government, the Taliban’s chief spokesman, Zabihullah Mujahid, promised that the lives of women and opponents would be protected.
The insurgents said they’d offer an "amnesty" to those who worked with the Afghan government or foreign forces.
"No one’s life, property and dignity will be harmed and the lives of the citizens of Kabul will not be at risk," the Taliban said.
However, there is already evidence of revenge killings and other brutal tactics in areas of the country seized by the group.
Top Stories