Ekpa also reiterated that Kanu would continually steer the ship of the Biafra struggle from the detention of the DSS. 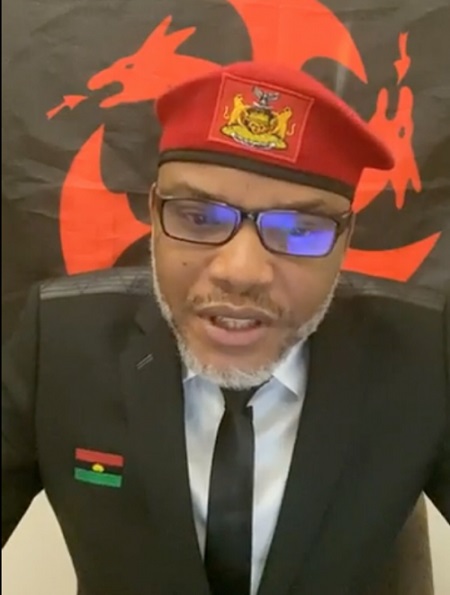 Nnamdi Kanu
Leader of the Indigenous People of Biafra, Nnamdi Kanu will lead the group from detention.
Simon Ekpa, the Finland-based member of the Indigenous People of Biafra said the detained leader of the group, Nnamdi Kanu, directed that he would henceforth lead the group’s Monday broadcasts from the Department of State Services’ detention.
Ekpa added that he (Kanu) had asked him to broadcast the topics he (Kanu) decided every Monday on Radio Biafra.
He also reiterated that Kanu would continually steer the ship of the Biafra struggle from the detention of the DSS.
Recall that IPOB through its spokesperson, Emma Powerful, had banned Ekpa from broadcasting following his alleged neglect of laid down rules and regulations of the station.
However, Kanu's Finnish-Nigerian disciple said the pro-Biafra seccessionist group leader had re-ordained him.
Ekpa said this on his Twitter page on Tuesday morning.
"Mazi Nnamdi Kanu from DSS detention has directed that henceforth, my Mondays’ live broadcast topic will be coming directly from him.
"I am Simon Ekpa, Mazi Nnamdi Kanu's Disciple on Biafra Restoration. He will continue to lead this struggle from DSS, Aso Rock Detention, from Prison,” Ekpa tweeted.
Top Stories